Nigerian Comedian, Debo Adedayo, popularly known as Mr Macaroni, has revealed why he declined to join his colleagues to visit the Vice President, Yemi Osinbajo at the Presidential Villa in Abuja. 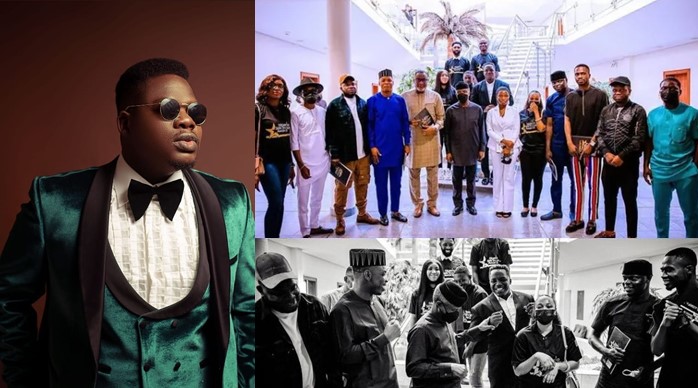 KanyiDaily recalls that Osinbajo had on Wednesday received a delegation of Nigerian comedians under the auspices of the Nigeria Skits Industry Awards (NSIA), led by its promoter, Hon. Bimbo Daramola, at the Presidential Villa Abuja.

The development had triggered a heated discussion among Nigerians on social media, with many users questioning why Mr Macaroni was “sidelined” by the organisers of the visit.

Some Nigerian youths also hailed the comedian for not joining his colleagues who they accused of visiting the vice president for selfish reasons.

Mr Macaroni Reveals Why He Declined To Visit Osinbajo

In a series of tweets shared on his Twitter page on Friday, the comdeian disclosed that he recieved the invitation but declined the request because he’s “not happy with the country’s leaders.”

Mr Macaroni said with his experience, he believes sitting down with government officials for deliberation does not yield results. He, however, said people should not condemn those who honoured the invitation.

He wrote; ”Honestly, I have tried so hard not to say anything about this issue but I have seen some comments and conclusions that do not really sit well with me. My conscience will not allow me to keep mute. So I have to say what I know for my conscience and posterity.

”First, I do not think there is an association of skit makers. If there is, then I don’t know anything about it. And that would be fine because I am an Actor/Thespian first before the Tag “Skit Maker”.

”So I don’t think those that went to see the VP without me or anyone else meant to sideline me. I want to believe they were invited to see The VP by the organizers of an Award Ceremony the same way I was invited. The only difference is that I declined the invitation.

“The reason I declined is simple. As a Citizen, I’m not happy with our leaders and I do not want to associate with them. It’s ok if others believe that sitting with the Govt will change certain things and decide to try it out. I don’t think they should be crucified for that.

“I have just seen too much to know that The Govt sees and hears everything. They and their workers are always on the Internet. They know what we cry and complain about and they do nothing about it. So what will sitting down with them to tell them what they already know change?

“I don’t know what was discussed in that meeting as I wasn’t there. But I don’t believe those that went would go there to say anything other than demanding for better governance and leadership as we all have been doing all these while.

“Where I Stand is that this is election season. The politicians that have abandoned us for years will start coming back to us again to promise heaven and earth. We need to see beyond their deceit. All they care about is photo op. Look around, the PR work has started massively.

“When Politicians say they want to engage me, I always tell them to pick a public place, where all members of Press would be present. So that I can say my mind as I see it. When they are begging for votes, they come to us publicly. So why do u want to see me privately?

“I am no Hero or Saint. I am not Perfect. I am only a Concerned Citizen who wants a better Nation for myself and for every other Nigerian. I use my voice, my craft and my platform to do this and I have been greatly persecuted for it.

READ:  "They're Traumatised" - Temmie Ovwasa Slams Those In 30s Who Date People In Their 20s

“This is who I am. It is who I have always been even before Fame. I have suffered so much for it and sometimes I ask myself why I am the way I am. But anytime I remember how many lives I have been able to impact positively, i am at peace with myself.

“I don’t think it would be fair to hold any other person by these standards. Hoping we all can promote Peace and Unity amongst ourselves and explore whatever means we dim fit to demand for a better Nation for ourselves and generations to come.  Debo.”

This comes a few week after Mr Macaroni led a car procession at the #EndSARSMemorial protest in memory of those who lost their lives at Lekki Toll Gate on October 20, 2020.