Popular socialite and social media celebrity, Ismaila Mustapha aka Mompha, has warned controversial crossdresser, Bobrisky, to desist from involving him in his online squabble with Nollywood actress, Tonto Dikeh. 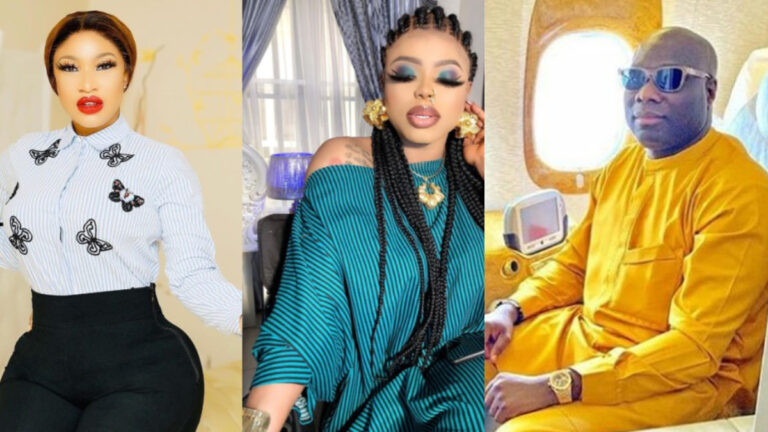 KanyiDaily had reported that Tonto Dikeh and Bobrisky have been dragging each other on social media while revealing dirty secrets about their former friendship.

While revealing what caused their fight, Bobrisky had mentioned Mompha’s name where he stated that the businessman gave Tonto Dikeh money to give him and she didn’t tell him about it.

Reacting to Bobrisky’s comment on his Instagram page, Mompha warned the cross-dresser to stop mentioning his name in any fight he has with Tonto or any other person.

The businessman, who countered Bobrisky’s claim of giving him money, admitted he gave Tonto Dikeh N300,000 for her foundation when she pleaded with me to support her pet project.

Mompha said the allegation is a “deliberate attempt by Bobrisky, who is notorious for seeking attention through every means (including blackmail), to smear and ridicule his personality before the world”.

READ:  Mompha Opens Up About Having Sexual Relationship With Crossdresser, Bobrisky

He wrote, “Boy/Girl, stop using my name for clout chasing. Are you mad or what, Bobrisky? Be warned,”

“My attention has been drawn to a statement credited to Idris Okuneye (aka “Bobrisky”), which is currently receiving traction across social media.

“In the said statement, Bobrisky stated that I gave Tonto Dikeh the sum of N300,000.00 without his knowledge. I wish to state that this is not only untrue, but a deliberate attempt by Bobrisky, who is notorious for seeking attention through every means (including blackmail), to smear and ridicule my personality before the world.

“Rather, it was Bobrisky who informed me that Tonto Dikeh accused me of being too stingy, which I refuted as untrue.

READ:  Peter Okoye Says He Tested Postive For Coronavirus, Alongside His Wife And Daughter [Video]

“The truth is that I only gave the sum of N300,000.00 to Tonto Dikeh for her foundation when she pleaded with me to support her pet project.

“It has, however, come to my knowledge that Bobrisky was actually at loggerheads with Tonto Dikeh, and resorted to using my name to discredit her before the general public.

“I want the general public to know that Tonto Dlkeh is just a friend like every other friend I have both within and outside Nigeria, and there is nothing hidden in my friendship with Tonto Dikeh or anyone whatsoever.

“Therefore, I am using this medium to sound a note of warning to Bobrisky, to desist from mentioning my name in any fight he might have with Tonto Dikeh or anyone whatsoever as he is not my friend and I do not waste my precious time on frivolities.

“Any further attempt by Bobrisky to drag me into his issues will be addressed by my lawyers in court.

“P.S: I want it to be in the public that I, Ismail Mustapha, as a devoted Muslima and a family man, have never and will never associate myself with gay people. My faith forbids it.”

This comes a few months after Mompha threatened to take legal action against Bobrisky’s ex-personal assistant, Kyme Oye, over allegations that he’s having an affair with the crossdresser.

Related Topics:BobriskycelebritiesEntertainmentFeudgistMomphaNigeriatonto dikeh
Up Next