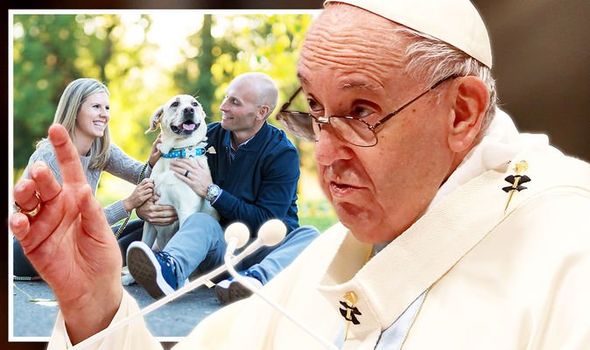 Speaking during a general audience at the Vatican on Wednesday, Pope Francis lamented that pets “sometimes take the place of children” in society.

The Argentine pontiff said that substituting children for pets was a “denial of fatherhood and motherhood and diminishes us, takes away our humanity.”

He said, “Today… we see a form of selfishness. We see that some people do not want to have a child. Sometimes they have one, and that’s it, but they have dogs and cats that take the place of children. This may make people laugh but it is a reality.”

Pope Francis argued that if people chose not to have children then “civilisation grows old without humanity because we lose the richness of fatherhood and motherhood, and it is the country that suffers.”

He acknowledged that some families may be unable to have children for biological reasons but said that those couples should consider adoption.

The Argentine pontiff referenced Jesus’s father Joseph as an example of an adoptive father, given that Jesus was the son of God born to Mary.

He said, “Saint Joseph, you who loved Jesus with fatherly love, be close to the many children who have no family and who long for a daddy and mommy. Support the couples who are unable to have children, help them to discover, through this suffering, a greater plan.”

“How many children in the world are waiting for someone to take care of them! We must not be afraid to choose the path of adoption, to take the risk of welcoming children. Having a child is always a risk, but there is more risk in not having a child.”

Pope Francis warned people that their worries about who would care for them in older life are justified and that children play a crucial role in this.

He also spoke of a “demographic winter” – possibly referring to countries with declining birth rates – in which “we see that people do not want to have children, or just one and no more”.

It is not the first time that Pope Francis has criticised people who prefer pets over children.

In 2014, the Pope said that choosing to have pets over children was “another phenomenon of cultural degradation” and claimed that emotional relationships with pets were easier than the “complex” relationships between parents and their children.

The 85-year-old Pope has been photographed petting animals ranging from dogs to panthers in the past, but he is not thought to have a personal pet.

His 2015 visit to the United States was marked by dog owners dressing their pets in canine papal outfits with the hashtag #popedog on Instagram.

When asked at the time if the Pope was aware of the trend, a Vatican spokeswoman said: “I imagine he has more important things to think about.”

KanyiDaily recalls that Pope Francis became the first pontiff to endorse same-sex civil unions, saying he thinks same-sex couples should be allowed to have a civil union.