The 10-year-old girl involved in the sεx tape scandal that trailed the trip of some students of Chrisland School in Lagos to Dubai, has apologized for her actions.

Last Tuesday, Lagos State Police Command had invited all parties involved in the sεx tape scandal to help the force probe the “immoral act” engaged in by students of the school during the Dubai trip.

Taking to her social media page that had the name: bhadgurl4k (bad girl fuck), the girl whose actual age remains controversial, admitted her mistake and apologized for her actions.

She posted on her Likee App: “I made a mistake, now I’m living with the consequences. I regret it, I really do. And I’m sorry. Please I’m sorry. All I ask is forgiveness.”

The 10-year-old told her followers that she would be off the social media radar for some time for her to recover fully from the mess the development has generated. 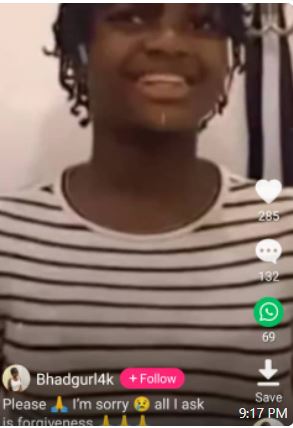 The development comes after the Lagos State Government ordered the reopening of all Chrisland Schools which were initially shut down due to the sεx tape scandal.