CHEAP BLACKMAIL AND CAMPAIGN OF CALUMNY BY THE DELTA STATE GOVERNMENT:
OUR POSITION: 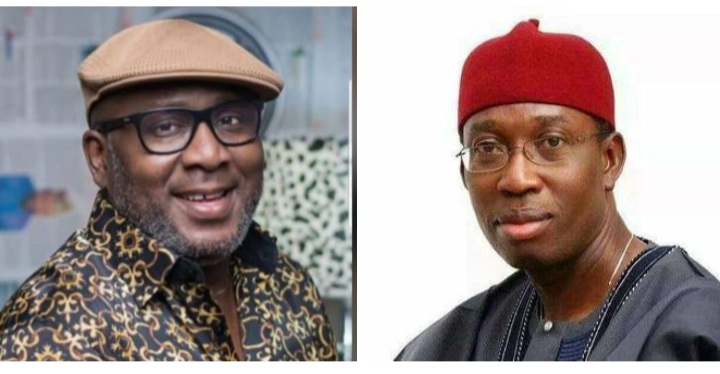 1. Our attention has been drawn to the insinuations contained in statements by officials of the Delta State Government during a press briefing on Tuesday the 7th of June 2022 that news reports in the programme, ”Inside the Niger Delta”, have been influenced by extraneous considerations other than verifiable facts.

2. Whereas, the said insinuations are laughable and can be fitly described as feeble, weak and kindergarten attempts by half-baked public relations handlers of Governor Ifeanyi Okowa who have been struggling and faltering in their efforts to dress the governor in borrowed robes and to cover up apparent facts with cheap lies.

3. ”Inside the Niger Delta”, as a syndicated television programme on many networks, ranks as one of the most objective current affairs programmes in Nigeria today. Its style of development programming is driven by the need to ensure the progress and development of the Niger Delta states through an accurate reporting of facts that promote accountability and responsibility of the state governments to deliver the benefits of good governance to the marginalized people of the region. The programme focuses on issues of good governance, the environment, community development, anti-corruption, and other related matters.

4. Clearly, the Delta State Government has now become afraid of its own shadows, being haunted by its manifest inefficiency to the extent of engaging in manufacturing lies and campaigns of calumny to attack institutional programmes like Inside the Niger Delta that is merely carrying on their professional and constitutional responsibilities.

5. All the factual references in Inside the Niger Delta are not only correct and verifiable but open to being challenged with the highest standard of scrutiny in news reporting. Therefore, it is highly unfortunate for the Delta State Government to have chosen the path of prevarication on some of the issues that were raised in recent editions of the programme.

*The N150 Billion Loan in Perspective*

6. A news and current affairs programme gauges trending issues, hence it was most appropriate for the producers of the programme to have considered examining the issue of the 150 Billion Naira Loan to be taken by the Governor Okowa led administration at a time when it had less than one year to the end of its tenure in office. The programme aired opinions that weighed heavily against the economic sense of the decision and raised concerns about underlying issues of corruption that are associated with the loan scheme.

7. Instead of the handlers of the governor and officials of the Delta State government responding to the issues that were raised in the programme, they chose to engage in the vilification of the person of the executive producer, Mr Felix ‘Mamode Akugha by making all sorts of unfounded claims that are unbecoming of any state government, hoping such cheap diversionary tactics would obfuscate the truth about the existence of incipient corruption and maladministration by Governor Ifeanyi Okowa.

8. The other issues which were raised in the subsequent editions of Inside the Niger Delta are as follows:

a. The Ughelli-Asaba Expressway which is yet to be completed after a period of 14 years despite the budgetary expenditure of billions of naira.

b. The payment of the Mobilization fee amounting to the sum of 35% of 5.1 Billion Naira for the construction of an international conference centre in Asaba.

c. Examining the Arise News controversial assessment of Governor Okowa as a suitable running mate to Atiku Abubakar in the 2023 general elections.

9. The above issues which are still trending are germane to the editorial policy of the programme and they were dealt with according to the application of the highest consideration of broadcasting ethics and standards with balanced views and opinions of relevant stakeholders, including officials of the Delta State Government were fully covered dispassionately.

10. Therefore, the resort of the Delta State Government to reducing its response to attempts at castigating the person of Mr Akugha for x-raying the above critical issues on the Inside the Niger Delta programme, shows a government that is desperate to cover up the truth with diversionary tactics.

11. Whereas, the officials of the Delta State government have exhibited crass incompetence and failed woefully to advance good reasons in their fervid and desperate responses to the public discourses on the suspicious 150 Billion Naira loan, the inappropriateness of the choice of Governor as a running mate to Atiku Abubakar, choosing to attack the person of Felix Akugha with lies and unfounded insinuations, indeed reflect a shallow mindedness of the officials of the administration of Ifeanyi Okowa.

12. The incisive facts contained in the reports in the programme cannot be cheaply debunked by alleging that they were motivated by Mr Akugha’s membership of the All Progressives Congress (APC), a fact which is not only untrue but baseless.

13. Mr Akugha has stayed focused as a professional broadcast journalist over the years and both the allure and intrigues of partisan politics have not in any way made him lose focus despite the attainment of resounding success in his career in public broadcasting. In 2015, despite being offered the position of a running mate to Otega Emerhor of the APC who contested for Delta State governorship in the 2015 general elections and, the known desperation of Senator Ifeanyi Okowa, at that time, who was known to have desperately persuaded Mr Akugha that he should reject the offer of a running mate to Emerhor and to openly proceed to declare support for him and PDP at an Asaba rally, yet Mr Akugha, staunchly stood his ground and defied the two hackneyed proposals of both Emerhor and Okowa and, maintained that he had no interest, whatsoever in politics.

14. To ensure success with his attempt to win over Mr Akugha, Gov. Okowa sent the Distinguished Senator Stella Omu ( a respected mother figure to Mr Akugha) who travelled to meet with him in Port Harcourt, Rivers State and after the discussions, Senator Omu put a call through to Okowa immediately, who himself spoke to Mr Akugha and explained the need for him to declare support for him (Okowa) at a campaign rally in Asaba, obviously to weaken Emerhor’s chances at victory during the elections.

15. Mr Akugha promptly turned down the Okowa offers and rejected any involvement in politics seeing the wicked machinations of the political class. That has remained his position to date. If Mr Akugha wanted to be involved In politics and profit from it, that would have been the opportunity. He is not a card-carrying member of any political party in Nigeria and therefore cannot be involved in politics as claimed by the officials of the Delta state government.

*The 80 Million Proposal- An Intended Kickback Scheme by the CPS*

16. The seemingly boundless banalities of the official responses of the Delta State Government to the issues contained in the Inside the Niger Delta report which is currently jolting the usual praise-singing handlers of Governor Okowa to a point of confusion, making them go as low as to refer to a proposal that was indeed requested by the Chief Press Secretary (CPS) to the Delta State Governor, himself through a marketing staff of the programme. The CPS meant to use the proposal as a ruse to promote the activities of the state government on the programme, whereas, it was meant to merely enhance his pocket.

17. Thus, we discovered that he was in actual competition with the State Commissioner of Information for the control of the State’s TV programme: SMART DELTA and only wanted to use Inside the Niger Delta as an avenue to raise funds and to push a media project that would benefit him personally.

18. Therefore, when Mr Akugha saw the puny scheme of the CPS as being merely self-serving, he immediately rejected the idea of the proposal because it was more of a scheme that would rake in kickbacks for the officials of the government contrary to the business policy of the promoters of the Inside the Niger Delta programme. That was the end of the proposal and was never followed up by any marketing staff of the Programme.

19. Mr Akugha reserves the right both as a Nigerian and particularly an indigene of Delta State, to exercise his franchise in support of any candidate of his choice as Governor of Delta State. The officials of the Delta State Government are in a state of illusion to assume a governorship candidate that Mr Akugha supports because of their morbid apprehensions that he may not be supporting a candidate they prefer. That issue like many others they are struggling to push in their failing propaganda doesn’t even require any further response.

*Conclusion*
20. Section 22 of the Constitution of the Federal Republic of Nigeria, 1999 (As Altered) mandates the Press- Radio, television and newspapers to promote good governance by holding the government accountable to the people, especially through reports that expose corruption and abuse of office. Essentially, the said reports on the _Inside the Niger Delta_ are in pursuant to the fulfilment of the above constitutional objective hence, the Delta State Government has become needlessly uncomfortable except it has skeletons in its cupboard to hide.

21. A responsible government, in response to what it considers to report that are too critical of its administration, would reexamine the issues raised thoroughly with a view to making appropriate changes and corrections rather than engaging in a campaign of calumny against personalities.

22. The Delta State Government must be reminded that truth shall always prevail against lies. Therefore, no amount of state-sponsored propaganda and smear campaigns and blackmail against the person of Mr. Felix ‘Mamode Akugha would deter him from constantly upholding the truth and the discharge of his constitutional duty of holding governments, especially governments at all levels in the Niger Delta, to be accountable to the people of the region and Nigerians.

*FOR: INSIDE THE NIGER DELTA*

2023: Peter Obi Calls Out INEC Over Slow Pace Of Voter Registration In South-East