Igbo traders from Alaba International Market were attacked by thugs who allegedly stopped from getting their PVCs at Ojo local government area of Lagos State. 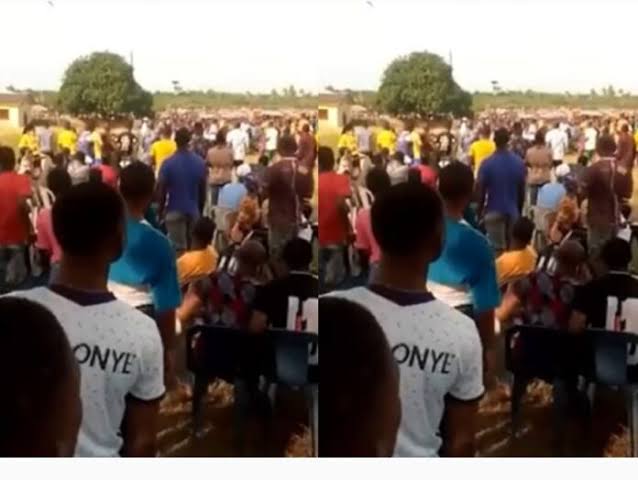 It was gathered that the traders had announced that they will be shutting down their shops on Thursday to get their PVCs ahead of the 2023 general election.

However, when they went to the iNEC office in Ojo, the officials refused to register them because of their tribe, while some of the traders were attacked by thugs.

READ:  Lagos Okada Rider Swept Away By Flood After He Refused To Let Go Of His Bike [Video]

Watch the videos and see some Twitter reactions below:

Igbo traders closed down Alaba market to register for PVC in Okoche LGA HQ today & Lagos thugs were sent to disrupt the process.

Mc Oluomo and his boys have started what they did to Igbos in 2019 on election day. This time, they are not even letting Igbos register for their PVCs. Why is there so much hate for the Igbo people in Nigeria? Gosh!! #VotePeterObiForPresident2023 #PeterObi2023 #PeterObi4President pic.twitter.com/IHQLxFPE0z

Nigeria is not for Igbos. Things are becoming more clear now. #BiafraExit
pic.twitter.com/qX34kJOanB

So Igbo traders closed Alaba market to register for PVC in Ojo Lagos, but thugs were sent to attack them. Igbos don’t vote, but you won’t allow them to register. When they cry now, y’all will say, “Igbos & their victim mentality.” Bcos, it works all the freaking time. Naija..🤣🤣

Reports of thugs disrupting Igbo voters is downright evil and clear for all to see! What are they afraid of? I’ve always been about oneness but it’s looking like agenda wants to convert a mf! Everyone of age has a fundamental right to get their PVC! Shame!

Igbo traders closed down Alaba market to register for PVC in Ojo, Lagos & thugs were sent to attack them. You won't hear pim from those screaming "you people don't vote", but once we start highlighting these issues, they come to Gaslight you with "you people & victim mentality".

Touts in Ojo Alaba, Lagos are frustrating Alaba traders who are mostly Igbos from getting their PVCs.
They have injured some traders.

The Inec Officials refused to Register Igbo people, they insisted the center will only Register Yoruba people, one of d Inec officials(an Igbo) was told he will be delt with if he ever register his people pic.twitter.com/QlTD1INM1a

Tinubu's thugs have started attacking Igbos that wanted to register for PVCs in Lagos.

Nigeria will be worse under Tinubu's presidency. We are warning.#JagaBandits

BREAKING NEWS!
Information just reaching me from an igbo friend that OJO local government in Lagos has refused to register Igbos because they know they won't vote for Tinubu, this is unfair and wicked.Please RT to create more awareness.#getyourpvc #PeterObi2023 #APCPrimaries pic.twitter.com/qHnnTlpqRl

Nigerians are suffering!! Igbo, Hausa or Yoruba. Christian or Muslim. We are all going through hardship. So why do we keep using tribalism to fight ourselves instead of joining hands together to fight the cause of this suffering and work towards a better society??

When Igbo people close down their stores to register for PVC. You know that the awareness has reached street level

The attack on My Igbo people who went to register for there PVCs is unacceptable! God is watching!

Nigerian Youth! Our only weapon now is our PVC’s🪪 if ur vote don't count nobody will pay u money to vote for him or her, so ur vote is ur voice lend it rightly don't sell it..

Let me translate this video in English

"We are going home. The @inecnigeria officials here told us that they have express instruction to not register Igbo people. Only Yoruba people are to be registered. Even the Igbo guy that works with them has been threatened. They said….. https://t.co/4nMmXsVyDV

KanyiDaily recalls that the presidential candidate of Labour Party, Peter Obi had also called out the INEC over slow pace of voter registration in the South-East.

‘No PVC, No Church’: Catholic Priest Sends Worshippers Without PVC Back Home [Video]