Imo State Governor, Hope Uzodinma has reacted to the controversy over a potential Muslim-Muslim ticket for the ruling All Progressives Congress (APC). 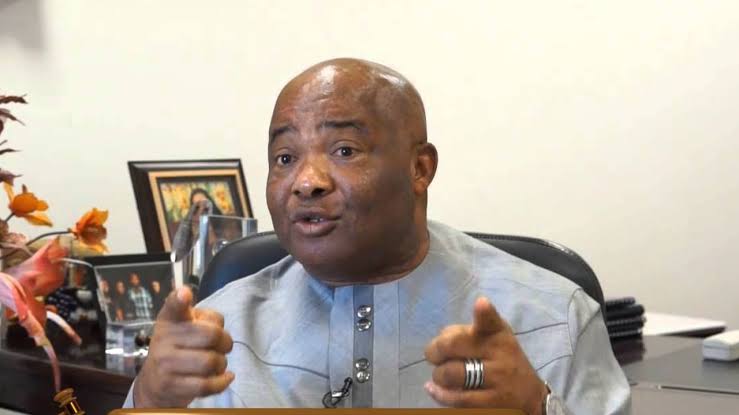 KanyiDaily recalls that the Christian Association of Nigeria had warned political parties against presenting presidential running mates of the same religion as them.

Reacting to the alleged plan by the APC presidential candidate, Bola Tinubu to choose his fellow Muslim as running mate, Uzodinma said numbers play a key role in the ability of a political party to win elections.

The governor, who spoke on Tuesday while briefing journalists at the presidential villa, said “spread is very important to be able to attract votes”.

He said, “Spread is very important to be able to attract votes. So the decision of who becomes your running mate, if I were the candidate, what will inform it is what will I do as an action that will enable me to get the kind of votes I’m looking for because the ultimate goal is to win the election.

“So maybe I’ll start from the nomination, ethnicity, or followership. In this business of democracy I think number is what is very important. And there are certain things as a nation, we should not bring to the public discourse, those things that are capable of creating divisiveness against national unity should not be encouraged.

“It does not mean that I will not remember that I come from a place but I must also be cautious and careful how to use where I come from in taking national decisions. That is very important.”

Uzodimma said Nigerians should not focus on the religious and geopolitical leanings of Tinubu’s running mate, but rather be interested in who can deliver.

“We are looking for united Nigeria, where governance will be the issue, where a president would be adjudged by his capacity to deliver democratic dividends, develop Nigeria to look like other parts of the western world where democracy is working,” he said.

“I don’t want us to reduce governance in Nigeria to certain things that will encourage divisiveness, rather, we should be a united Nigeria, be our brother’s keepers, have a president of Nigeria that will be a president representing every tribe, every religion, every denomination. And when we get there, we will cross the bridge.”

The governor also said it is the responsibility of Tinubu to pick his running mate.

KanyiDaily had earlier reported that President Muhammadu Buhari met with APC governors to discuss the choice of running mate for Tinubu.

READ:  2023: Why Goodluck Jonathan's Men Are Mobilising For Tinubu