Borno State Police Command has arrested a 24-year-old man, Usman Hassan, for allegedly defiling a 10-year-old girl in an uncomplicated building in Maiduguri.

While being paraded alongside 67 criminals yesterday, the suspect narrated how he lured a 10-year-old girl with N30 to have carnal knowledge of her in an uncomplicated building.

Hassan, who claimed he had consensual sex with the minor, alleged that she requested him to give her some money and in return, offered herself in return.

“She was following me and rubbing my body up to the uncompleted building where we were caught having sex. I gave her only N30 for the sex and we did it with her consent,” he said.

KanyiDaily had also reported how a 15-year-old boy was arrested by the police for allegedly sodomizing two children in Rivers State. 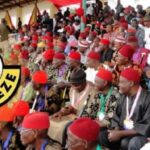