Music promoter, Sam Larry has distanced himself from the video where fast-rising singer, Portable claimed he founded the two notorious cult groups terrorizing residents in Lagos. 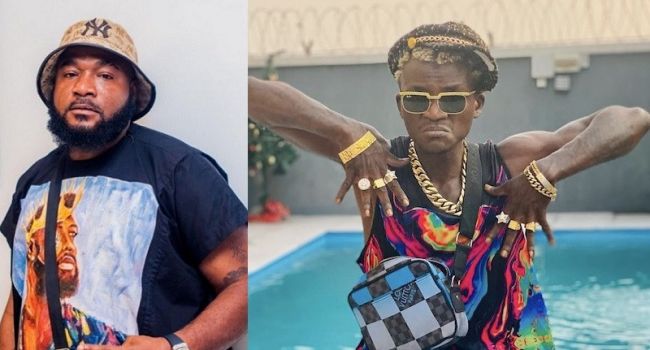 KanyiDaily recalls that Portable had shared a video where he boasted that he created the popular robbery gang called ‘One Million Boys’ and another cult group known as ‘Ajah Boys’.

He listed Larry among those who witnessed his influence in the cult group.

The inspector-general of police (IGP), Usman Alkali Baba has ordered the commissioner of police in Lagos to investigate Portable’s statement and take necessary legal action.

Reacting in a video shared on his Instagram page, Larry disowned Portable for linking him to cultism, stressing that he just assisted the singer with his trip because he is a music promoter.

The show promoter, who noted that he hadn’t known Portable for more than a year, also cut ties with the singer, adding that “I never want to see your calls again.”

He said, “I had that something is happening on social media about One Million Boys. I don’t know anything about them and I don’t know them. Portable who mentioned my name, I am his benefactor. I helped him to travel because am a promoter.

“Where do I know you from? When did we meet? At what point did we have any joint dealing involving one million boys? I’ve not known Portable for more than a year, yet the unfortunate man is mentioning my name in his rants.

“I’m not the only person he mentioned but it’s only my name the public committed to heart. What’s the meaning of all that? Never mention my name in negative things! And I never want to see your calls again. I’ll block you even.

“My wife’s family and other people have been calling to ask me what is the meaning of One Million Boys Portable mentioned my name about? Please correct yourself because I don’t know you.”

Sharing the video, Larry wrote: “In regard to the trending topic about 1 Million Boys.. I am a promoter and I only knew @portablebaeby few months ago when he released the trending song Zazoo.. I took him for a show in Kenya and also in Dubai ..

“Please I advise everyone to disregard what he said stating I and 4 others mentioned knew about him been the founder of 1 million Boys ..

“I don’t have any association to the criminal group which caused pains and havoc to us during the lockdown and I also made a call through to @portablebaeby that I have cancelled all ties with him and he should never contact me again because this is a big stain to my name.”

READ:  Man Divorces HIs Wife During Wedding Reception After She Requested A Feminist Song