In July 2022, billionaire Micheal Diongoli, a Ponzi scheme operator was arrested and arraigned before a Federal High Court in Lagos State for allegedly defrauding a retired Army colonel, two professors, a co-operative society, among others of the sum of N1,286,580,656.

Diongoli, who was arraigned alongside his two firms, UK-Don Group and UK-Dion Investment Limited before Justice Lewis-Allagoa, is facing eight counts of conspiracy, obtaining by false pretences, and fraud.

The flamboyant billionaire was accused of defrauding his victims, under false pretence of multiple returns on investment within the period of six months to one year.

In July 2021, Nengi flaunted her newly acquired Range Rover worth N40 million, a few months after she bought a new mansion in Lagos.

READ:  NIJ Lecturer Speaks Out After Being Sacked For Placing His Tongue On Female Student’s Vagina

Although Nengi credited her achievement to her consistency, dedication, and hard work, Instagram blogger Gistlovers refuted that claims, saying the Range Rover was a surprise gift by her alleged billionaire lover Micheal Diongoli.

According to Gistlover, Diongoli, who is married with kids, was dating Nengi and was responsible for her frivolous lifestyle and several features in movies.

Following Diogoli’s arrest for fraud, many of the billionaire’s properties were confiscated by the EFCC, including the ones he gifted his numerous side chicks.

A Twitter user who broke the news of Diongoli’s arrest alleged that the EFCC had seized the reality star’s Ronge Rover as proceed of crime.

“Appaz he financed a few projects for Nengi and its been reportedly seized as proceeds of crime. Was confiscated in July actually.” In a viral video, another lady claimed that the Range Rover, mansion, and other monetary gifts given to Nengi by Diongoli has been seized by the EFCC and the reality star has been grilled by the EFCC.

She said, “So guys I’m back with this gist. Since I heard this gist I’ve been digging and digging. You all know me nah. You know I used to dig to get to the root of things like I just don’t come out and spill.

“So, according to the gist, this babe, last year or last 2 years I can’t remember when launched this range Rover and we where all like oh God when, she’s hard working, She deserves it.

“So, according to my source, it was alleged that it was a big God that got the range Rover for her. Which is not even the gist oh, I mean almost everybody is now getting gifts from their big God but that’s not the gist.

“The main Koko now is that the range Rover has been taken away from her and it’s not by the big God.

“According to my source, it was alleged that the big God that got the range Rover for her is under EFCC raider. He was called in, he was invited for questioning bla bla bla and along the line, she was linked with him so all the monetary gifts and all the gifts she got from him where taken away from her and a whole lot.

“She was even invited for questioning as I’m talking to u now, this range Rover is no where to be found, it has been seized.”

KanyiDaily recalls that Rebecca Nengi Hampson had recently taken to social media to put her banging body on display. 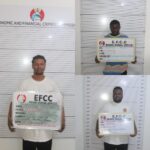 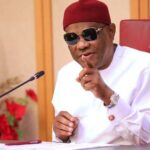