Akindele, who was unveiled as the PDP governorship running mate last month, July 12th, called on Lagosians to get themselves what she called a “New Doctor”.

Taking to her official Instagram handle on Tuesday afternoon, she likened Lagos state to a patient who is sick.

She argued that Lagos state has suffered enough and needs a breath of fresh air, directly saying herself and the governorship candidate, Olajide Adediran, fondly called Jandor, are the answers and new doctors the state needs.

“If you’ve been suffering from a medical condition for years and your “EXPERIENCED DOCTOR’ has neither provided you with a diagnosis nor a treatment, please get yourself a NEW DOCTOR,” she wrote.

Kanyi Daily recalls that Akindele, also known as “Jenifa” had early this month said she understands the dynamics of leadership and pledged to bring about the desired change and hope to Lagosians.

This site also recalls that last month, during an interview with Channels TV, she boasted that her millions of fans on social media would vote for her and the PDP.

In other news, Babajide Sanwo-Olu is the current governor of Lagos State under the platform of the All Progressives Congress (APC) and he seeking a second term mandate. 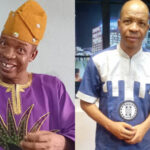