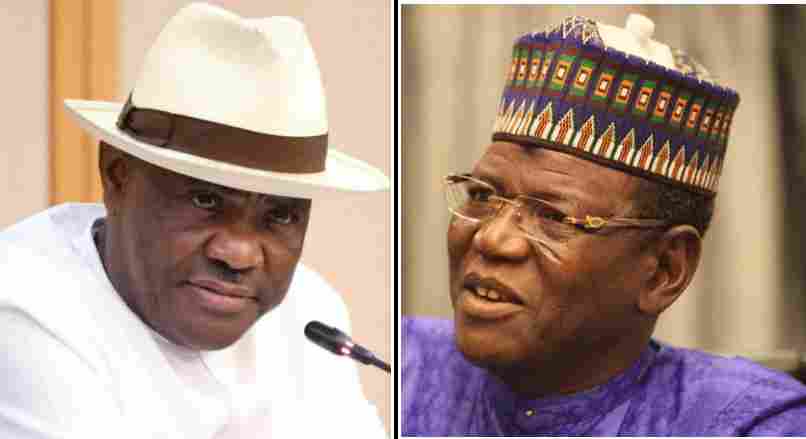 The PDP has been embroiled in crisis due to the rift between Atiku and Wike which started after the governor lost the party’s primaries to the former vice president and subsequent picking of Delta State Governor, Ifeanyi Okowa as running mate.

Speaking of the development during an interview on Channels Television, Lamido dismissed the crisis, adding that “we should forget about Wike” to be bluffing.

The former governor described a reconciliation committee set up to resolve the differences between Atiku and Wike as mere well-wishers, arguing that the party did not offend anyone.

“Get this straight, they are people who are well-wishers, who want to make sure there’s peace in PDP. They are not there for PDP or for anybody else; they are simply there for Atiku as a person, not as a candidate of the party.

“They are not there because of PDP. Similarly, Wike is a PDP man; he can’t say I want to reconcile, reconcile with who, who offended who? How?” Lamido asked.

He said Wike is trying to claim for himself the power of an “Emperor”, adding that he has no monopoly or control over the people of Rivers state because of his position as the governor of the state.

“Wike is an individual and I don’t think because he’s a governor, he has total monopoly and control over Rivers; he hasn’t got it. He’s only speaking because he’s just bluffing.

“Rivers people are people who are already in PDP, they are alright. They were there in 1999 when he joined, they were there when he was the council chairman so they have been there with him, not simply because he’s their governor.”

“Go to Akwa Ibom, there’s a governor there. Go to any other state, there is a Wike in every part of Nigeria who are governors,” Lamido said.

READ:  2023: Chris Ngige Pulls Out Of Presidential Race, Says He Wants To Focus On His Job

The former governor added that Wike should be left alone to do whatever he wants as he cannot control the people of Rivers because they are not his slaves.

He continued, “Please, leave Wike alone; he has the right to do whatever he wants, he can give order on. If people in rivers are enslaved, they are his own slaves; therefore, he can control them. Fair enough, he’s their emperor.

“There are 13 candidates for the Rivers state governorship election and it was Wike who imposed his own candidate and nobody questioned that. They were just screaming and complaining but he said no. I saw him on TV when he was talking because he was too bombastic – ‘I will not allow this, I will not allow this’. Which one will you not allow? This country called Nigeria is not for individual.

“In the next eight months, Wike is going to be the same political destitute like me, a former governor.”

This comes barely 24 hours after reports emerged that Nyesom Wike held a meeting with the presidential candidate of the All Progressives Congress (APC), Bola Tinubu in Paris, France.

READ:  Zimbabwe Woman Post Younger Sisters Nude Pictures On Facebook After Catching Her In Bed With Her Nigerian Boyfriend