Senegal has defeated Ecuador 2-1 to become the first African team to qualify for the round of 16 at the ongoing 2022 World Cup in Qatar. 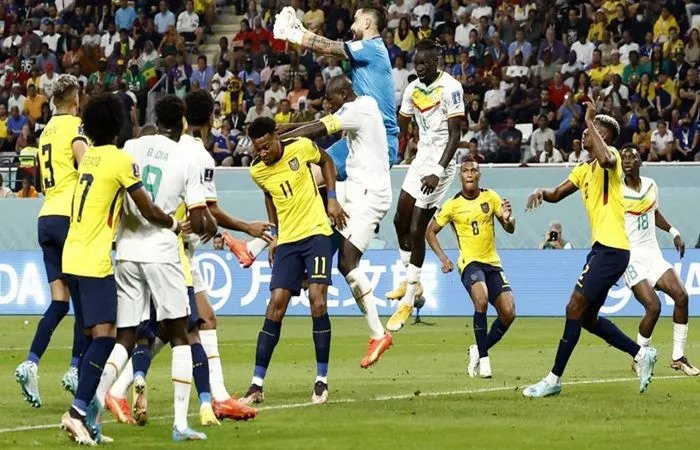 All three goals came from players based in England as Ecuador’s Brighton midfielder Moises Caicedo canceled out a penalty by Watford’s Ismaila Sarr before Chelsea defender Kalidou  Koulibaly‘s side-footer won it.

Ecuador needed just a point to progress but paid the price for a passive display as Senegal were spurred on by an almost non-stop cacophony of drumming from their supporters in Al Rayyan.

Watford winger Sarr coolly stroked home from the spot, after being clumsily upended by Ecuador defender Piero Hincapie, to put the African champions deservedly ahead.

Ecuador levelled with their first real chance as Caicedo swept home Felix Torres’ flick-on but Koulibaly’s composed finish immediately regained the lead for Senegal, who knew only victory would be enough to go through barring an unlikely Qatar upset against the Netherlands.

The Netherlands’ dominant victory over Qatar meant only a win would see Senegal through to the knockouts from Group A, while Ecuador would have progressed with a draw.

Senegal finished second in Group A with six points, one point behind the Netherlands, the group winners who strolled past hosts Qatar, thanks to goals from Cody Gapko and Frenkie de Jong.

Senegal became the first African team to beat a South American side at the World Cup since Cameroon against Colombia in 1990, ending a 21-game winless run in such meetings, and are only the third African nation to reach the knockout stages on two or more occasions, emulating Nigeria and Ghana.

They will, however, be without influential midfielder IdrissaGueye, for the second round – and what would have been his 100th cap – after he picked up a second yellow card of the tournament.

KanyiDaily had also reported how Ghana secured the top spot of Group H after a dramatic 3-2 victory against South Korea at the World Cup in Qatar.

Related Topics:EcuadorFootballgistNewsSenegalsportsVideoWorld Cup
Up Next