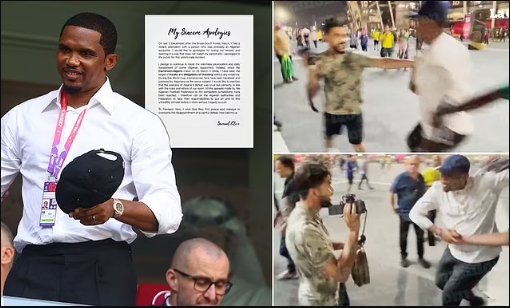 The former Barcelona striker was caught on camera kneeing the YouTuber as he filmed him while he left Stadium 974 in Doha where Brazil had just beaten South Korea 4-1 on Monday.

It was gathered that Eto’o lost his temper after Mamouni asked whether the ex-footballer had given the referee a bribe before Cameroon’s crucial playoff victory over Algeria in March, which granted his side a place at the World Cup in Qatar.

Cameroon qualified for the finals in Qatar on away goals after scoring in the 124th minute of the second leg in Blida, and Algeria requested a replay after filing a complaint over the performance of the referee, but the world governing body Fifa turned down the request and upheld the result.

On Monday night, footage showed Eto’o advancing toward Mamouni before he was restrained by bystanders, but he then broke free and appeared to attack the Youtuber with his knee.

In his statement on Tuesday, Eto’o apologized for his actions, saying he was provoked by a fan who was “probably” an Algeria supporter as part of an ongoing campaign of harassment following Cameroon’s World Cup play-off win over Algeria in March.

“On 5 December, after the Brazil-South Korea match, I had a violent altercation with a person who was probably an Algerian supporter.

‘I would like to apologise for losing my temper and reacting in a way that does not match my personality. I apologise to the public for this unfortunate incident.

‘I pledge to continue to resist the relentless provocation and daily harassment of some Algerian supporters. Indeed, since the Cameroon-Algeria match on 29th March in Blida.

‘I have been the target of insults and allegations of cheating without any evidence. During this World Cup, Cameroonian fans have been harassed and pestered by Algerians on the same subject.

‘I would like to mention that the scenario of Algeria’s defeat was cruel but perfectly in line with the rules and ethics of our sport. All the appeals made by the Algerian Football Federation to the competent jurisdictions have been rejected.

‘I, therefore, call on the Algerian authorities and Federation to take their responsibilities to put an end to this unhealthy climate before a more serious tragedy occurs.

‘To Fennecs’ fans, I wish that they find peace and manage to overcome the disappointment of a painful defeat, now behind us,” he wrote. The incident happened two days after Cameroon crashed out of the World Cup despite beating Brazil 1-0 in their final Group G match at the Lusail Stadium on Friday.

READ:  White Man Tearfully Begs For His Money After Being Scammed [Video] 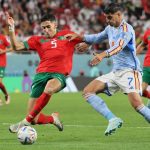 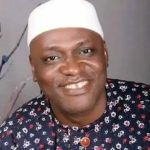