A police officer lost his life on Friday after a suicide bomber detonated a device after his car was stopped in the Pakistan capital. 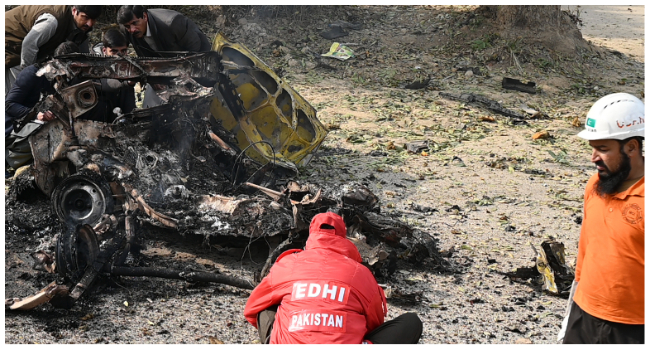 The country’s officials said this is the first attack in the city for years.

Reports say Islamabad has largely been spared the low-level attacks carried out in the country’s megacities of Lahore and Karachi, and also along the border areas near Afghanistan.

According to a senior police official, Sohail Zafar Chattha said officers had been following a suspicious taxi occupied by a male driver and a woman passenger.

“They were stopped and the long-haired man was asked to come out,” Chattha told reporters at the scene.

“He came out, but quickly went back inside and pressed a button that blew up the car.”

He said the fate of the passenger was not certain, but a policeman was confirmed dead and six people were wounded — including four officers.

Pakistan was for a time plagued with almost daily bomb blasts across the country, but security vastly improved after a military crackdown that began in 2016.

Violence against security officials has risen in the northwestern border areas with Afghanistan over the past year — blamed on militant groups linked to the Pakistan Taliban.

Tehreek–e-Taliban Pakistan (TTP), separate from the Afghan Taliban but with a similar hardline Islamist ideology, called off a stop-start ceasefire with the government in November.

A crowd that gathered after Friday’s Islamabad blast was quick to blame the group, though no claim has yet been made.

“TTP is doing all this… how can they claim that they are Muslims?” said Qasda, who only gave her first name.

Haji Mohammad Saeed, 60, a retired government official, said authorities should end all negotiations with the group: “They are taking advantage of this dialogue and causing violence.”