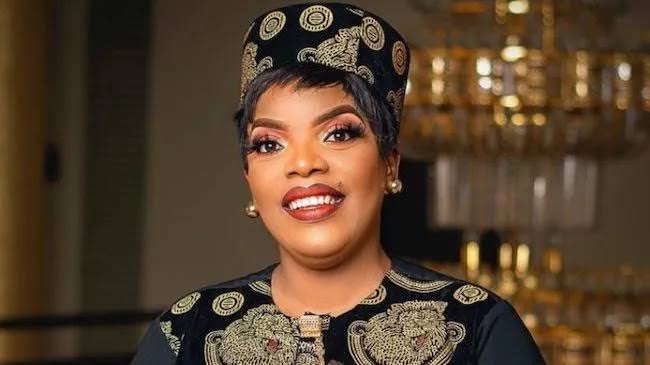 Recall that Njamah has been in the news since she claimed that Wade was trying to blackmail her with her nude videos in his possession.

The nudes sparked outrage and fans of the movie star accused the ex-lover of leaking the naked videos of Njamah.

According to a statement issued by AGN Director of Communication, Kate Henshaw, the guild condemned the leaked nudes of the actress.

The statement called for the arrest of Wade, adding that breach of privacy is a “serious offence”.

“This act of blackmail calculated to smear the image and publicly ridicule her by a man who claimed to be her lover is not only criminal but also evil and unacceptable,” the statement reads.

“It is worthy to note that exposing nude videos and photographs of a person that injure her right to privacy is a serious offence.

“Actors Guild of Nigeria stands with Empress Njamah on this and shall provide full support in areas of counselling to help her recover from the psychological and emotional trauma she is currently passing through.

“We have been in forefront of a campaign of violence against women and we view the action of this so-called evil lover man as an act targeted at eroding her dignity and self-respect.

“We call on the law enforcement agents to apprehend the culprit and ensure he faces the full wrath of the law for violating the right and dignity of Empress Njamah.”

In other news, Kanyi Daily reported how a 47-year-old suspected burglar, Ganiyu Yusuf was arrested by the Kwara State Command of the Nigeria Security and Civil Defence Corps (NSCDC) for allegedly raping a housewife in Ilorin, the Kwara State capital.

READ:  Patience Ozokwo To Nigerians: Vote With Your Sense, Heart

BBNaija Star, Erica Nlewedim Reveals Why She’s Not In A Rush To Get Married