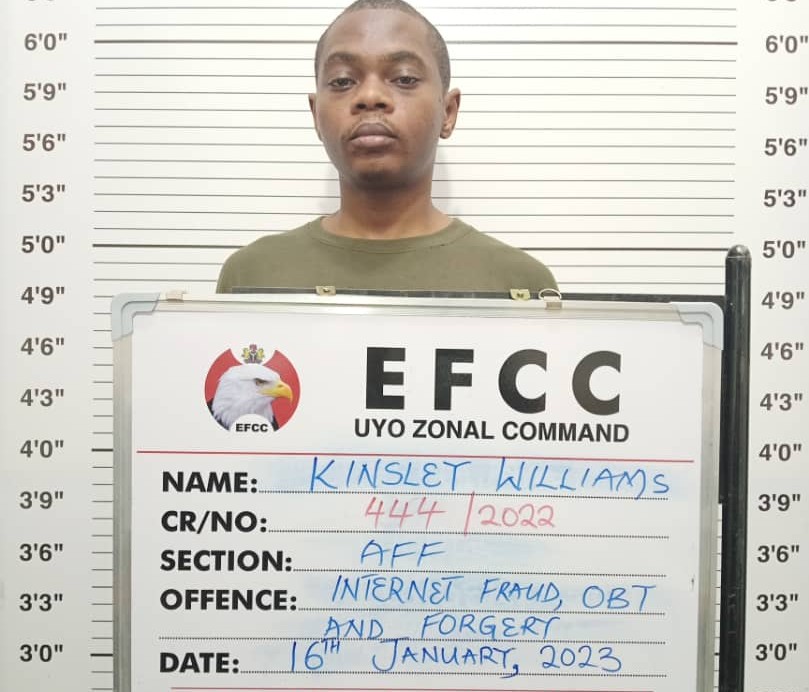 Kingsley was arraigned by the Uyo Zonal Command of the Economic and Financial Crimes Commission, EFCC on a one-count charge bordering on possession of fraudulent documents.

The lone-count charge reads: “That you, Kingsley Williams “M” sometimes in 2022, within the jurisdiction of this Honourable Court did possess documents containing false pretences and thereby committed an offence contrary to Section 6 of the Advance Fee Fraud and Other Fraud- Related Offences Act 2006 and punishable under Section 1 (3) of the same Act”.

He pleaded guilty to the charge when it was read to him.

Given his plea, counsel to the EFCC, Enobong Ubokudom, reviewed the facts of the case and tendered the confessional statements of the defendant, his laptop, and fraudulent documents,  which were all admitted in evidence and marked as exhibits A, B, C &  D. Ubokudom thereafter urged the court to convict Kingsley as charged.

Defence counsel, Francis Ezike prayed the court to tamper justice with mercy and give his client, “a first-time offender”, a lesser sentence.

Justice Onyetenu sentenced him to four months imprisonment without an option of a fine. The sentence runs from the date of arrest. The court further ordered that the laptop, used in committing the crime, be forfeited to the Federal government.

Kingsley’s journey to jail started on November 4, 2022, when he was arrested by operatives of the Commission, following actionable intelligence concerning his online criminal activities.

Upon arrest, investigations revealed that the convict specialised in employment scams. His modus operandi includes luring his victims with job opportunities that never existed and deceiving them into paying for fraudulent working tools for the phony jobs.

In other news, Kanyi Daily reported that Italy’s most wanted mafia boss, Matteo Messina Denaro was arrested by Italian police on Monday.

60-year-old Messina Denaro, who had been on the run since 1993 was nabbed in a private hospital in the Sicilian capital Palermo where he was undergoing treatment.

READ:  18-Year-Old Girl Who Didn't Know She Was Pregnant Fell Into Coma And Woke Up With A Baby