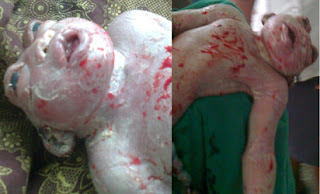 A woman gave birth to this strange looking baby in Ekiti State. The woman, believed to be in her 30’s is also a mother of two. The lady was pregnant with this baby for 13 months, even the doctors thought she was carrying twins. She finally put to bed through a caesarian section at the general hospital, which caused a pandemonium as doctors and people trooped into the hospital to behold the sight. Though the baby died at birth, the lady is doing well and has been assured by doctors that she’ll be fine. Her husband witnessed the delivery and gave his consent for the hospital authorities to dispose the body because he wouldn’t want his wife to catch a glimpse of it.
Describing the baby, a source at the hospital said, the baby had two bulging eyes and a few strands of hair on the forehead, instead of a brain, the baby had loads of mucus and was very tiny at birth. One of the doctors suggested that the baby might have been deformed due to excessive drugs and herbs intake, hence the reason pregnant women are advised to abstain from excessive drugs and concoctions.
To me this is really strange, I have never seen anything like this before. What do you all think this, is this another ‘JUJU’ situation or should we rely on the doctor’s medical explanation ?