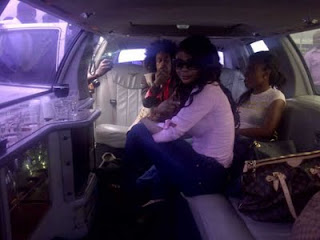 Denrele Edun who left Popular urban music station, soundcity in april after
working for 6 yrs under the channel has taken the next step in his career. The
crazy red Carpet presenter and reality star, Karen will be the new face to
emerge at Africa’s popular music station, channel O.

There is
Unconfirmed rumours that the two famous friends with crazy personalities might
be starting their own show on the urban music channel based in South Africa. Ok,
what many had speculated though. So Africa will be seeing their dear Karen on
the big screen again.

I think they are good to go. Aside their charming
personalities, they both love talking. And this might be the craziest show ever
on TV. I think Karen won’t disappoint, after all, Uti is also doing well as TV
host on M-net. The rumour is not yet confirmed though

Denrele started his
journey in entertainment when he met with the Soundcity boss, Tajudeen Adepetu
in 2005 on the set of popular soap Opera, Everyday People.

‘My Experience With ‘The Stalker’ For 6 Years’ – Omowunmi Akinnifesi