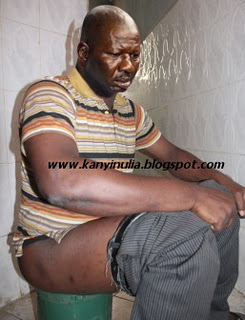 Though,
the anti-drug scanning machine at the airport which screened Baba Suwe detected
some drugs hidden in his stomach leading to his arrest and eventual detention by
the National Drug Law Enforcement Agency (NDLEA)….

The popular comedian
has excreted three times but no traces of hard drugs were found in his excreta
on the three occasions. This led to outcries from members of the public
especially Baba Suwe’s colleagues in the Yoruba genre of Nollywood calling for
the release of the comedian. His lawyers have even slammed a N100 million suit
on the anti-drug agency.

However, the controversy deepens last Friday
when a Lagos High Court gave the NDLEA authority to hold on to the comedian for
15 more days. This was sequel to the new discovery by a CT scan conducted on the
actor which revealed that indeed there are drugs logged his body….

The
raging controversy has been whether it is true that the actor has some drugs in
his body. Many are of the belief that if indeed Baba Suwe has drugs in his body,
he could have health problems since he was arrested. “If indeed he has
hard drugs in his body, he should have died since,” Sade Oloriebi, an
actress stated.

But the NDLEA would not have none of this. According to
the anti-drug agency, Baba Suwe’s case is not isolated as there have been
similar cases in the past. “In fact we have had cases where the accused
raised curses on us after excreting three times but no drugs were discovered on
them. However, after CT scans were carried out on them and drugs were
discovered, they ate humble pie,” an official of NDLEA
said.

Another controversy introduced into the matter now was the issue of
juju popularly called Africa Magic. “There was no doubt about it. He was
carrying drugs but we know he is powerful spiritually. The drugs may have
disappeared through juju. The machine actually detected drugs in his
system,” an official of NDLEA at the Airport disclosed.

Another
NDLEA official corroborated his colleague’s claim. “Our machine detected
it at the Airport, people said we are telling lies that we are just witch
hunting him now that the CT scan conducted at the Lagos University Teaching
Hospital (LUTH) has confirmed drugs in his body again what will people say? The
fact remains that this man is using high level juju on us,” he
said.

For those who are bringing in the juju angle, they pointed to the
actor’s different postures as the drama unfolds. When he was first arrested, it
was discovered that Baba Suwe was a little bit jittery. But as event unfolds, he
started regaining his confidence leading to the show of support by his
colleagues. He was even reported to have boasted to close friend and colleague,
Jide Kosoko that even if he was asked to excrete 1000 times, they wont find anything on him….