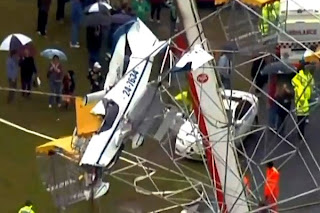 A passenger plane smashed into a Ferris wheel at a festival outside the Australian capital, Canberra, on Saturday, trapping a pair of children on the ride and two people in the aircraft, which hung suspended from the top of the ride for hours.
The crash brought an early end to the day’s festivities but caused no serious injuries. The plane, a superlight Cheetah S200 glider carrying two passengers, crashed into the carnival ride amid poor weather on the first morning of an annual three-day festival in the town of Old Bar, some 220 miles north of Sydney on Australia’s eastern coast, local media reported.
Two children, ages 9 and 13, were trapped in a compartment close to the point of impact for about 90 minutes, the local police said. The plane’s pilot and passenger were also stuck inside the battered aircraft, which was suspended more than 30 feet in the air for almost three hours, the police said.
The pilot, Paul Cox, 53, said he had not seen the Ferris wheel before his glider collided with it. “The next thing I knew, I was stopped inside the Ferris wheel,” he told The Associated Press. “I had no idea for a few minutes, and I was just hoping no one got hurt.”
The plane had taken off from a nearby airfield before becoming disoriented with poor visibility. Authorities credited the bad weather with keeping more children from the ride, which had been packed earlier in the day.
“Thankfully, everyone was taken down and were able to walk away from it,” the spokesman for the New South Wales Rural Fire Service, Ben Shepherd said…..