The man who sewed his teenage son’s butt won’t be going to jail. 52-year-old Randy Swopes has accepted a plea deal instead. Swopes from Illinois will be put on 24-months probation and have to do 250 hours of public service. The incident took place in 2008 and his son was 14 years old at the time.

So why did he take a needle and thread to the teen?

Swopes’ son suffers from Crohn’s Disease. It’s an autoimmune disorder that causes one’s own immune system to destroy healthy tissue. Those afflicted can suffer from fever and gastrointestinal tract problems. It can also result in a fistula, which is an abnormal connection between an organ and another structure. The fistula needed medical attention during the time of the offense, the report said.

Swopes chose to sew it shut himself rather than take the son to the hospital which resulted in an infection that put the teenager in the hospital for almost a month. Swopes was charged with aggravated battery. Typically, a charge for regular battery can be deemed “aggravated” when great bodily harm occurs or some sort of weapon is used.

In Swopes’ case, it was likely due to the needle he used to sew up his son. Illinois will also aggravate normal battery offenses based on the perpetrator and victim’s status. For instance, attacks against physically handicapped people can be charged as aggravated battery.

The state charges the offense as a felony. Had Randy Swopes not taken the plea deal, he could’ve been sentenced to prison for two to five years. He entered an Alford plea to aggravated battery. In an Alford plea, a defendant does not admit guilt but acknowledges that prosecutors have enough evidence to possibly win a conviction. 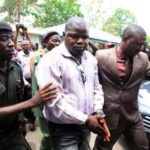