A Nigerian teenager living in London was stabbed, beaten unconscious and had concrete poured inside his body before being buried in a shallow grave under a shed, the Old Bailey has heard. It is alleged that Stephen Ojerinola, 18, was dumped in a makeshift grave in the back garden of one of the attackers following the in Kidbrooke, South East London.

Jurors were told that William Regan and Lee Davies, who are accused of murder, then erected a flatpack shed on top of the teenager’s burial site. The court also heard that after arranging the ‘undignified and unlawful burial’, Regan phoned the victim’s girlfriend to ask whether she had seen him.

Ojerinola’s body was not uncovered until seven months after he disappeared during a police visit to Regan’s home. Regan and Davies, both 36, are said to have attacked Ojerinola at some point on April 11 or 12 last year but it was not until November 20 that police unearthed his remains. Source THE NATION 24.05.201 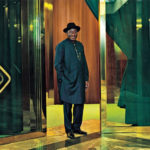