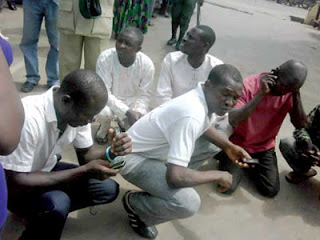 Lagos State Waste Management Authority (LAWMA) dragged five scavengers
to a Lagos court for allegedly entering a refuse dump site at Igando,
Lagos, illegally. They were remanded in prison after the arraignment.
The men are: Sunday Oyedele, 33, Waisu Ayeni, 23, Akinwumi Akintoye, 38, Fadeyi Sampson, 35, and Mathew Igene, 45…..Hmmmm dumpsite??? What is this Naija turning into…No work, No money, You go to dumpsite where dirts are disposed, you get arrested. Ok o

The defendants told a PM news reporter that they had been scavenging at
the site for some time before the new LAWMA workers came and started
demanding money from them to enable them to enter the site.
They claimed that their inability to part with undisclosed amount of
money daily caused their predicament, an allegation the workers declined
to make any comment.

P. M.NEWS confronted some of the workers at the court on the issue of
demanding money from them. One of the LAWMA workers identified as
Nurudeen told our reporter they would not comment, saying he was not
authorized to speak on the matter.

P. M.NEWS gathered that the LAWMA workers contacted the police at Igando
division who swoop on the scavengers at the site and arrested the
suspects, while others escaped.

They were arraigned in the court on a four count charge of illegal
entry, obstruction of LAWMA and conduct likely to cause a breach of
public peace by illegally assembling at the site. The police claimed
that the offence they committed was contrary to sections 44, 52, 117 and
338 of the Criminal Code Law of Lagos State of Nigeria 2011. They
pleaded not guilty.

The presiding Magistrate, Mr O. A. Komolafe granted them bail in the sum of N50, 000 each with two sureties in like sum.
The matter was adjourned till 13 August 2012 while the defendants were
remanded in custody pending when they meet their bail condition.

Meanwhile, the residents of the defendants under a group stormed the
court singing solidarity song, condemning the action of LAWMA. They said
the victims resorted to scavenging because of the economic situation in
the country, yet LAWMA went ahead to worsen their plight.