A top security source in Maiduguri confirmed the tragic story to on
the telephone.  The spokesperson of the Joint Task Force in the State,
Lt. Col. Sagir Musa, has also confirmed the incident.

The security source said that the nine people were trapped in the
night by an unknown group of persons who invaded their residence and
slaughtered them one after the other, leaving them in a pool of their
blood.

The source added that residents of the Bolori area heard the people
crying and wailing as they were being maimed by their invaders, who were
said to be heavily armed.

All the corpses were recovered this morning before hundreds of people
residing in the area, with many in the crowd unable to hold back their
tears.

Before they were ambushed, the dead were said to have been working towards building a Mosque in Maiduguri town.

As of the time of this report, no group has claimed responsibility over the slaughter 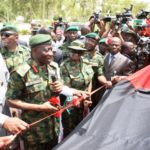