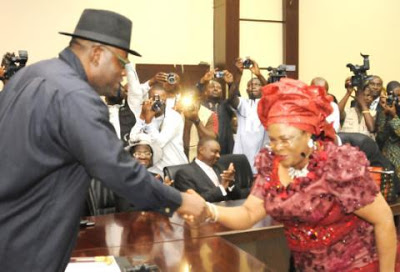 We told you HERE that Nigeria’s First Lady, Dame Patience Jonathan  was appointed Permanent Secretary in Bayelsa state. Incase you missed her response to people’s Outrage over her appointment, read it HERE. Well she stole the show yesterday
as  Governor Seriake Dickson of Bayelsa swore in 19 newly appointed
Permanent Secretaries in the State Civil Service.
Her Acceptance speech below

Hmmmm so to be elected is now a career abi….Ok ooo…Continue jare.

The First Lady walked into the Government House Banquet Hall, venue
of the event at exactly 12.39pm in company of the governor after other
appointees had taken their seats an hour earlier.

The colourful ceremony which held at the Government House Banquet
Hall in Yenagoa was witnessed by prominent Bayelsans inc luding the
first civilian governor of the state, Chief Diepreye Alamieyeseigha and
his wife; Special Adviser to the President on Inter Party Affairs, Mrs.
Mariam Ahmadu-Ali amongst others. Dame Patience was granted the privilege of being the first to take
both oath of office and allegiance administered by the state chief
registrar, Ineikadi Uzakah as the ceremony commenced at 12.50pm while
others were taken in batches.

The listing of Dame Jonathan among appointees had generated
widespread resentments when it was announced, but the state governor,
Seriake Dickson, in the post swearing remarks had maintained its defense
of her appointment.

Governor Dickson noted that the resentments were misplaced, coming
from majority critics with inadequate knowledge of her track record and
level in the State Civil Service, declaring that her appointment
“followed all due process in  line with the law of the state and
Nigeria.”

He declared that no other person was more deserving of the honour
than Dame Jonathan based on her compassion and immense contribution
towards the development of Bayelsa State from her status as wife of a
former deputy governor, later governor of the state, vice president and
now President of the Federal Republic of Nigeria. 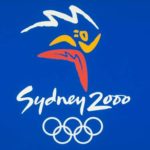