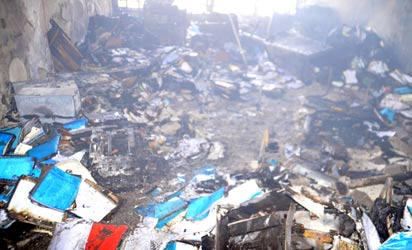 Fire razed a section of Independent National Electoral Commission, INEC’s headquarters in Abuja, Monday, causing pandemonium around the Maitama area of the Federal Capital Territory, as staff of the commission ran to different directions for safety.
The incident came barely 18 months after a similar one occurred in the office of the commission’s chairman, Professor Attahiru Jega, causing destruction on the visitors’ room as well as some computer sections.
It was gathered that the fire which started in the Voter Registry Department of the Commission may have been caused by electrical fault.
Speaking to Journalists at the scene of the incident, the Director of Information Communication Technology, ICT, of the commission, Engineer Chidi Nwafor,  no vital document of the commission was affected. 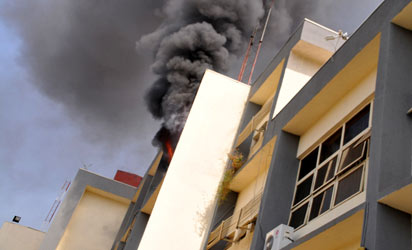 Nwafor said, “There was a fire incident this morning. Between 9:12am  to 9:30am we started perceiving odour like a burnt odour, so what we did was to look for the place. It was in the department they call voter registry.
“Most of us that were around that time had to use the normal fire extinguisher to try to stop the fire and at the same time we called the fire service and the fire service came, when the fire service came the NEMA came, as I am talking to you now the fire has been quenched so no more fire now. It was only one office that was affected,” he stated.

An Open Letter To Tonto Dikeh From An Igbo Man