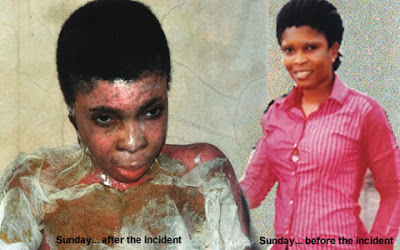 Culled From Punch
A 27-year-old woman, Mary Sunday, has been in the hospital bed at Igbobi Orthopaedic Hospital seven months after she was allegedly attacked by her fiancé, Corporal Isaac Gbanwuan, with a pot of boiling stew and a lighted stove. It was learnt that Sunday had lost her ears due to the attack.
Before the attack, which took place in August 2012, Sunday, was to report for training at the Police Academy, Kano as a cadet officer.
Still nursing severe burns to her neck, chest and upper arms, Sunday can barely sit or walk straight. She holds her head stiffly and talks with difficulty as she recalled the events that led to her present state to PUNCH Metro on Wednesday.
She said, “I have known Gbanwuan for a while, while I was still a student at the University of Nigeria, Nsukka, but it wasn’t until our marriage introduction in 2011 that I moved in with him at the Pedro Police Barracks, Lagos.
“On the day I was assaulted, Gbanwuan and I went to see our doctor. We had some health issues. While we were on our way back home, I made a phone call. Immediately we got home, Gbanwuan started querying me. He accused me of keeping lovers and claimed the person I called was my lover.
“I tried to explain to him that it was my sister I called, but Gbanwuam was not listening. He began to beat me,” Sunday said.
Unable to take it any more, Sunday said she ran into the kitchen of a neighbour with Gbanwuan giving pursuit. He allegedly broke into the kitchen where he continued to assault Sunday.
She said, “Then to the horror of those who tried to intervene, Gbanwuan seized his neighbour’s cooking stove on which was a pot of boiling stew, emptying the entire contents on me.
“I don’t know for how long I was unconscious but I was later told that I was in a coma for seven days. I learnt the stove also exploded after Gbanwuan threw it with the boiling soup at me.
“I was first rushed to a private hospital at Bariga before I was eventually transferred to Igbobi hospital.
“I couldn’t tell my family for a while because I could not use my hands; they were sort of stuck to my chest. It was after much treatment, that I was able to use my hands and call my family.”
Sunday’s lawyer, Mr. Moses Kassim, told PUNCH Metro that a petition had already been sent to the Police Provost Office and the Commissioner of Police.
He said, “We have still not received any response from either of them. Gbanwuan is yet to be arrested despite the fact that Sunday’s family reported the case at the Pedro Police Division.
“While Sunday is confined to a hospital bed, Gbanwuan is still at his duty post at the Ebutte Ero division, showing no concern for her condition.”
Copies of the acknowledged petition received by the Provost Office and Commissioner of Police were dated January 17, 2013.
When PUNCH Metro contacted Gbanwaun, he denied causing any harm to his fiancée.
He said, “What Sunday has told you are all lies. She has been going about saying all sorts of things about me.
“That is how she wrote a petition through her lawyer to the Lagos State Police Command. Anyway, the matter is already being investigated by the command.”
When our correspondent sought his opinion on how Sunday got her injury that had kept her in the hospital, the policeman said, “I don’t know what to tell you. Like I said, the matter is being investigated.
The Lagos Deputy Police Public Relations Officer, DSP Damascus Ozoani, said he was yet to be fully briefed on the issue.
He said, “I don’t have all the facts right now. Let me investigate and I will respond to the story.”
But Sunday said she was more concerned with getting well.
She said, “All I want is the money to treat myself. My doctors are afraid to tell me how much because they don’t want me to be worried, but I have overhead them discussing several times.
“There is a deep wound in my chest which has to be treated and then my neck has to be operated on because it has been stiff since the incident and then there is the matter of my upper arms.
“The doctor, who attended to me at the first hospital I went to in Bariga, told me that I would have to go to India to have my ears reconstructed because they melted. He said I would need N5m.
“Gbanwaun’s family has abandoned me. They did so immediately my family reported the matter to the police. My mother is dead and my father is aged. Coping with my daily treatment here is a struggle for my siblings.” 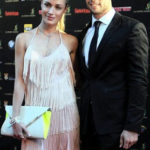