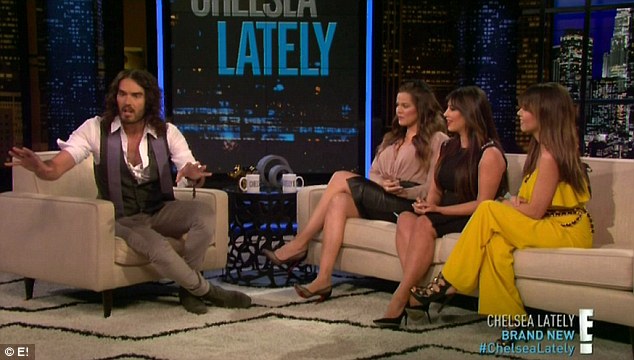 Russell Brand is well known for his self confessed womanising ways, but even he may not be able to achieve his latest conquest.  The British comedian admitted that he would love to have a ‘foursome’ with the Kardashian sisters.
The 37-year-old Lothario, who was married to Katy Perry for just 14 months before they divorced last year, joked he would entertain the idea of sex with the trio….continue to see what he told them
Speaking directly to reality television stars Kourtney, Khloe and particularly pregnant Kim, he lavished them with compliments and described Kim as ‘radiant and beautiful’. The three sisters were guest hosts on a Kardashian takeover of chat show Chelsea Lately, on which the three siblings were interviewing guests.
Brand charmingly quipped: ‘I’m vulnerable to the concept of a KKK threesome. ‘I think pregnant women are radiant and beautiful and the idea of lactation is an interesting one.’
Following his remarks, Khloe turned to Kim and said: ‘Well, I heard pregnant p***y is the best p***y.’
The conversation didn’t get any cleaner after that, because Brand made it clear that nothing would be more interesting than continuing to talk about: ‘A limitless, foaming river of milk and orgasm.’
The sisters all giggled while Brand high-fived former X Factor host Khloe.

Lolz, War Hero Traces His Wife’s Stolen Phone To A House, Reports To Police Who Are Busy To Retrieve It