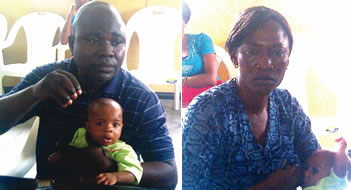 The Police Special Fraud Unit, Ikoyi, Lagos State has arrested a couple, Mr. Adenuga and Mrs. Elizabeth Soyibo, for allegedly attempting to smuggle a set of twins out of Nigeria to the United States of America.
The Soyibos were arrested by SFU, following a report from the American Consulate on April 15 2013 that the couple, who had earlier applied for American visas, claimed to be parents of the babies- a boy and a girl- who they had no genetic relationship with.

The application was denied on the basis of the DNA result that revealed that the couple lacked genetic marks which must be present in the twins if they were the biological parents. Adenuga, who was on a brief visit to Nigeria, also had his passport seized by the American consulate.

Adenuga, who claimed to be an American citizen and his wife, however faulted the report of the American consulate, insisting that they were the biological parents of the babies.

He said, “My wife had trouble conceiving children and we were advised to consult one Mrs. Helen Okoro in Port Harcourt. We were given herbal drugs to take and after several months, my wife got pregnant. At the time, I had already gone back to the United States.

“When it was time for delivery, she travelled to Port Harcourt to meet Okoro. She was delivered of twins in Okoro’s maternity home on November 23 2012; a boy and girl.

“So you can imagine my surprise when we were told at the embassy that the children had no genetic relationship with us. That was in Feburary, when we went to the embassy for interview after Elizabeth’s visa application.

“That DNA test was paid for by me and I am ready to repeat the test in any other hospital. Those children are mine.”

Corroborating her husband’s claims, a visibly upset Elizabeth also insisted that the babies that the couple held during the parade were theirs.

She said, “Just because I wanted to get pregnant, I paid N1.8m into Okoro’s Skye bank account. I have given the account number to the police, let them conduct their investigation.”

The Commissioner of Police SFU, Mr. Tunde Ogunsakin, said, “After the consulate reported the case to us, we began investigation. SFU detectives travelled to Port Harcourt, in a bid to locate Okoro and verify Soyibos’ claims that indeed Elizabeth had actually given birth to the babies.

“However, on getting to Port Harcourt, Elizabeth told SFU detectives that she could no longer identify or locate the place and that she had no ante-natal record in any hospital as she had not attended any. The couple could also not produce anyone else who also knew about the conception and delivery of the babies.
“Presently Soyibo and Elizabeth are both on bail; they could not be detained because of the babies. Efforts are being made to apprehend Okoro and when the investigation has been concluded, the couple will be charged to court.”

Its learnt that Okoro might have attracted police interest due to her role in providing babies for couples.
Last month, the Imo State Police Command arrested three persons for attempting to traffick two babies from Rivers State. The police had said the original scene of crime was at Uzoma village, Oyibo Local Government of Rivers State.

One of the suspects, Patience Aibangbe, claimed to have paid N1.8m to a certain Port Harcourt-based Mrs. Okoro for herbs, which would enable her, conceive. 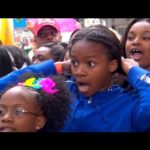