President Muhammadu Buhari has challenged anyone with information on alleged shady deals involving his wife and son to publish it.

Buhari made this challenge during an interview with Arise TV on Monday night, when he was reacting to allegations of being unfair, protecting some corrupt persons in his government while those in the opposition were being hounded. He said:

“It is a very unfair allegation against my integrity. I don’t think… anyway you are in a position to find out and if you do so, I don’t care.

“Publish it, even if my son or my wife has a company and they are involved in deals with Customs and and so on, bringing in illegal goods or whatever, I challenge you to do that.”

The president also even as denied instructing the Economic and Financial Crimes Commission, EFCC, to stop the probe of a former governor of Akwa Ibom State, Senator Godswill Akpabio, who recently joined the All Progressives Congress (APC) from the main opposition party, Peoples Democratic Party (PDP). He said:

“I don’t think when Akpabio moved to the APC, I said he should be left alone. I cannot remember asking the EFCC, the ICPC, the police or anybody to spare any corrupt person or incompetent person.  I haven’t done it and I challenge you to expose any.” 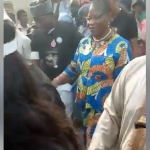 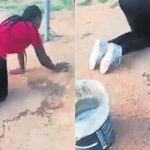