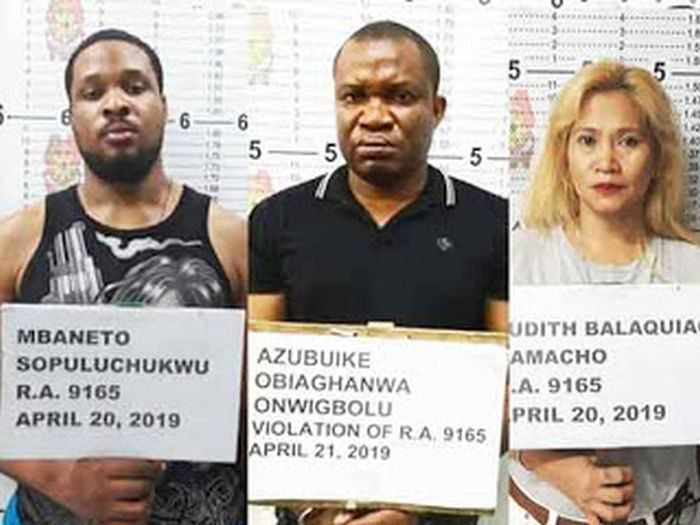 Two Nigerians have been arrested by Philippine Police with about N125 million worth of methamphetamine.

According to Phillipino media, the policemen arrested a Nigerian businessman identified as Azubuike Obiaghanwa Onwigbolu, 32, a resident of Angeles City, Pampanga, at 2:15 a.m. on Sunday, April 21st.

Onwigbolu was arrested through a buy-bust operation, wherein a Philippine National Police (PNP) personnel acted as a buyer and bought 200 grams of methamphetamine amounting to P400,000.

Following his arrest, the police operatives recovered P16 million worth of the drugs.

The other Nigerian identified as Mbaneto Sopuluchukwu alias “Hermann Kurt Philip,” 22, was arrested alongside his accomplice, Judith Balaquiao-Camacho, 46, from Bombon, Camarines Sur, in another sting operation.

A poseur buyer and an informant from the Philippine National Police (PNP) in Bicol and the Philippine Drug Enforcement Agency in Camarines Sur, posed as buyers and purchased 100 grams of methamphetamine using fake money.

“We Used To Be Respected, But Now We’re Always In The News For Wrong Reasons” – Amaechi To Rivers People