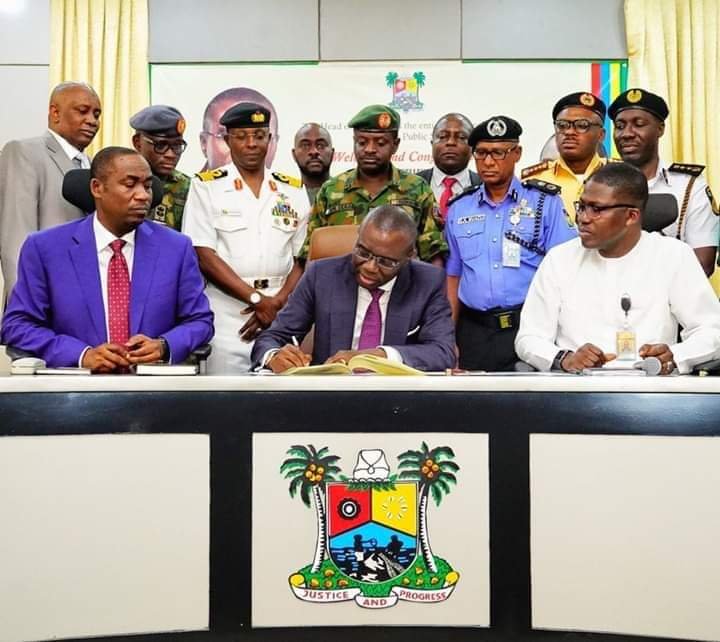 Upon his resumption at work, Sanwo-Olu signed an Executive Order against indiscriminate dumping of refuse, waste management, traffic management among others in the quest of his administration’s drive towards achieving a greater Lagos.

Shortly afterwards, the governor met with the members of Lagos State civil service and urged them to brace up and contribute their quota to the development of the state, saying they cannot afford to fail Lagosians at this critical point.

Speaking at a meeting with ciivil servants and Permanent Secretaries during his familiarisation tour of offices in the Secretariat, Sanwo-Olu acknowledged that there were challenges, but urged the workers not to be deterred and imbibe the right attitude to work.

“I just want to say to Lagosians that new things will begin to happen. Yes, there are issues and that is why there is a word ‘issue’. There will be issues, there will be challenges but out of it, looking at all your faces, we cannot afford to fail the citizens at this period.
“So, my charge is this: whatever we know that we are not doing so well even in the period of Ramadan, let’s ask God for forgiveness,’’ he said.

Sanwo-Olu, who was accompanied by his Deputy Governor, Obafemi Hamzat, and the Head of Service, Hakeem Muri-Okunola, acknowledged the rousing welcome from civil servants and heads of parastatals who had gathered as early as 8am to receive the governor.

The governor also advised the workers to be change agents, assuring them that their concerns would be addressed, but that the workforce must reciprocate his good intention through hard work and innovations to bring about the desired changes and development.

“I know that when we take care of you, you will take care of Lagosians and so those are the promises I want to draw from all of you.
“I know all these because I have been here before but let us begin to think and innovate on how we are going to bake a bigger cake; let us begin to think out of the box and when we do that it becomes available for all,” Sanwo-Olu said.
He gave assurance that issues surrounding the minimum wage would be addressed, promising to ensure that the take-home pay of workers would truly take them home.

“On the issue around the minimum wage, we are going to sort that out very soon and I will make sure that whilst we do the work that we are meant to do, your take home will begin to take you home, but Lagosians have to feel it from day one from the way we speak to them and from the way we take their records,” the governor said.

Earlier, the head of service introduced the governor to the workers after which they accompanied him on a walk to the Ministry of Physical Planning and Urban Development, where they sang different songs to his delight.

Later in the day Governor Sanwo-Olu and his deputy toured Apapa. 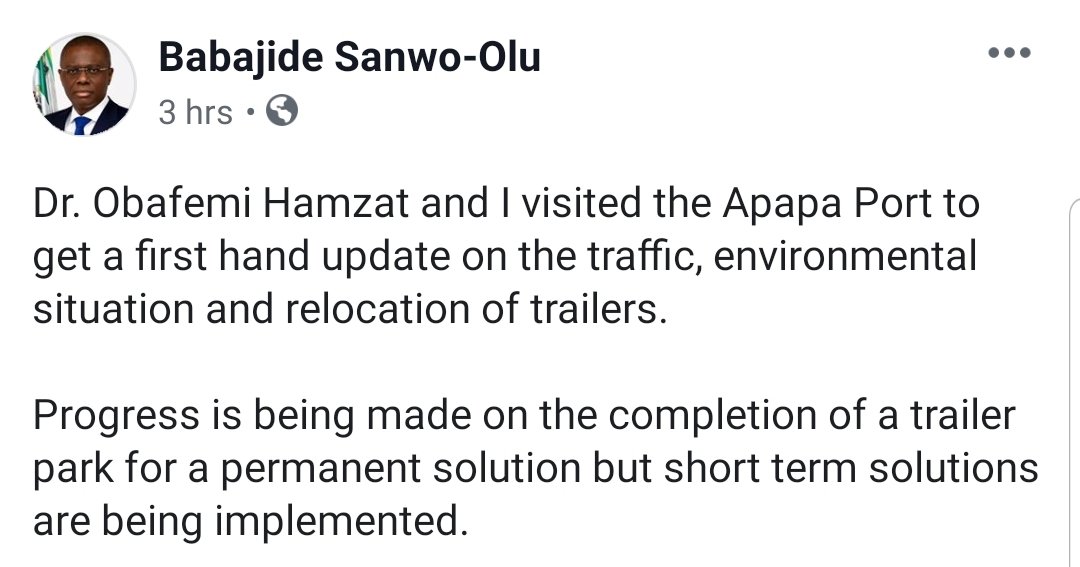 Dr. Obafemi Hamzat and I visited the Apapa Port to get a first hand update on the traffic, environmental situation and relocation of trailers.

Progress is being made on the completion of a trailer park for a permanent solution but short term solutions are being implemented. 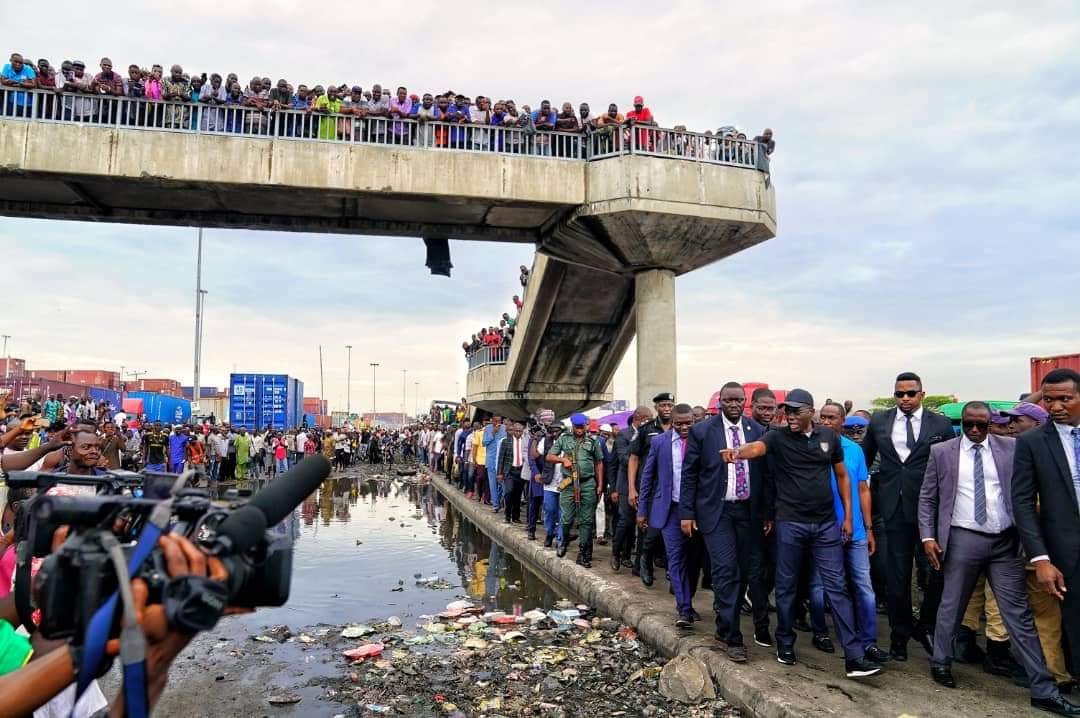 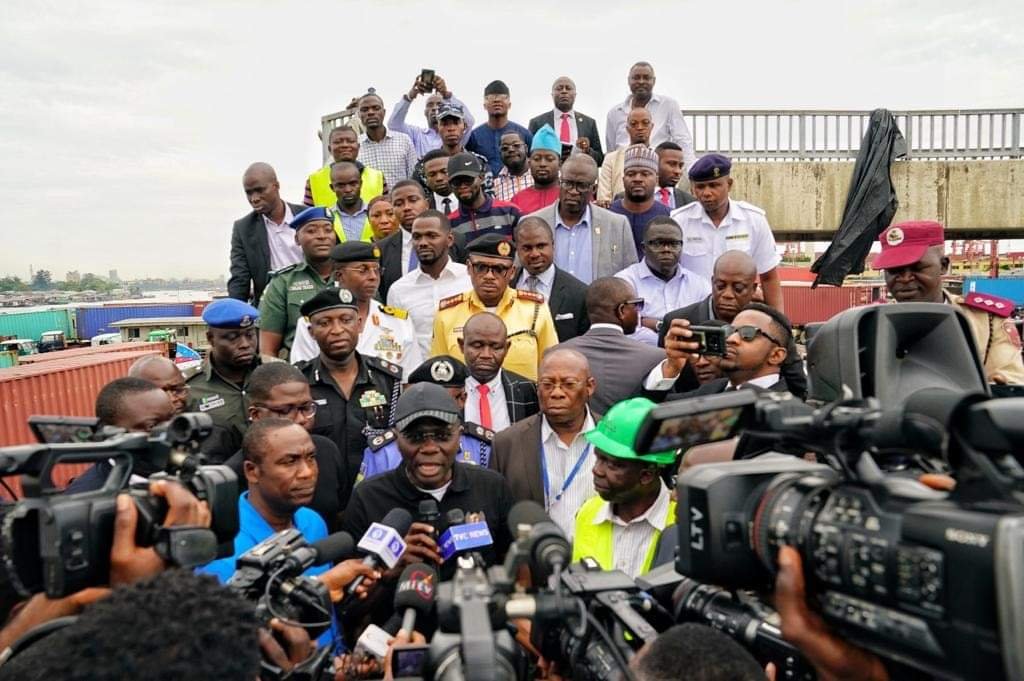 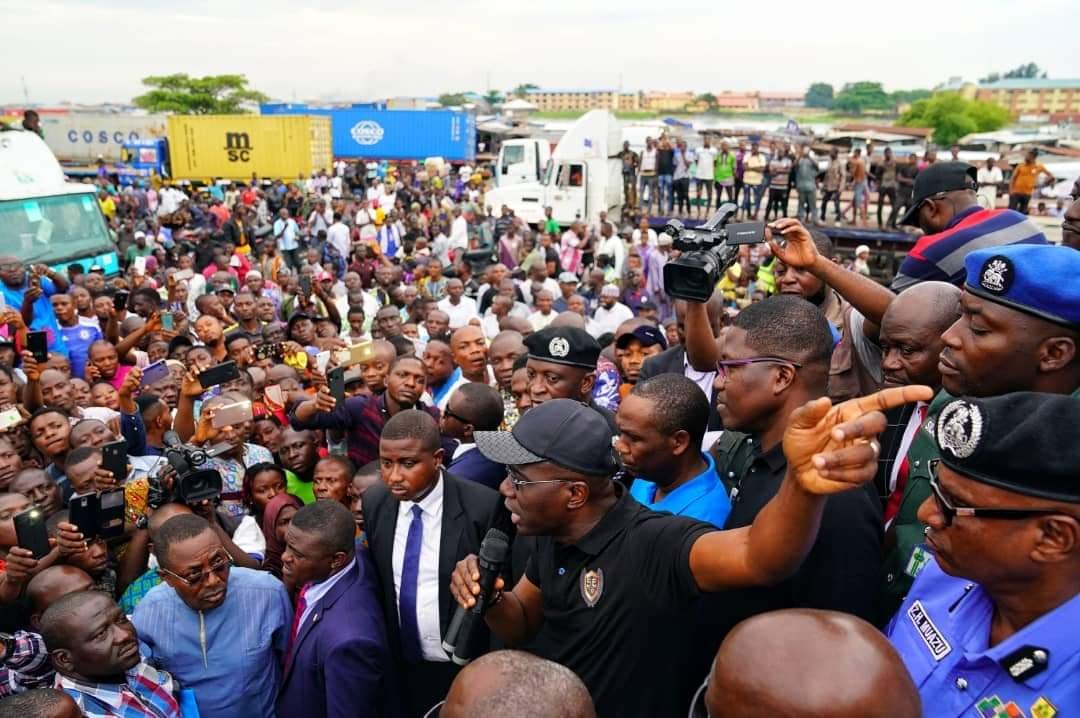 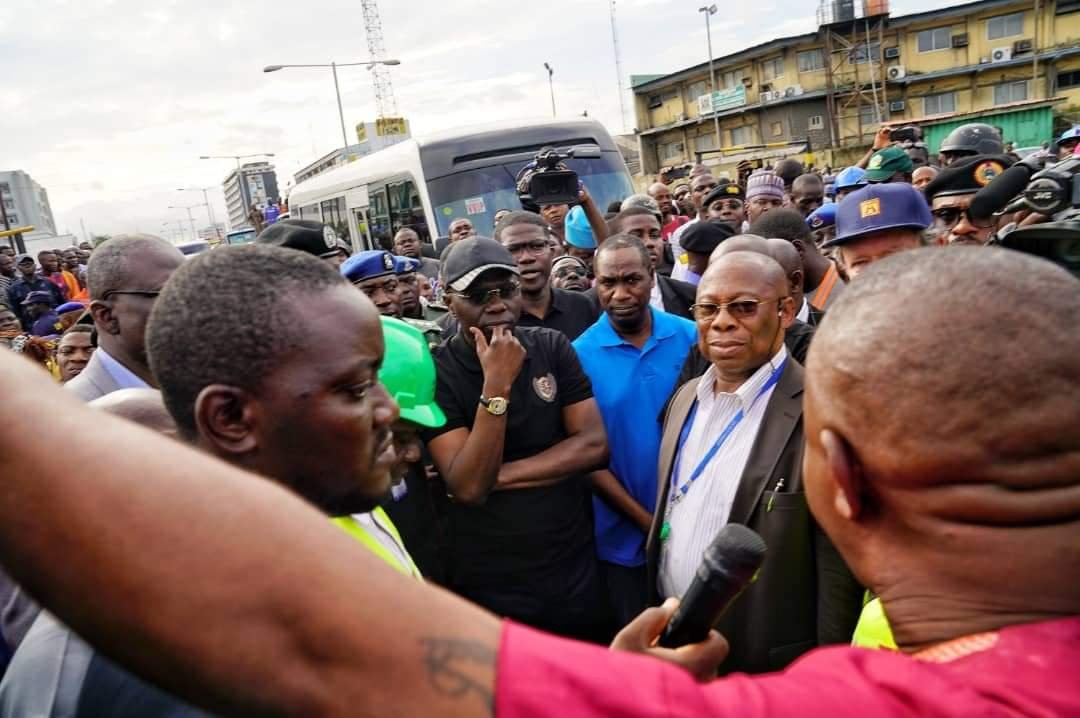 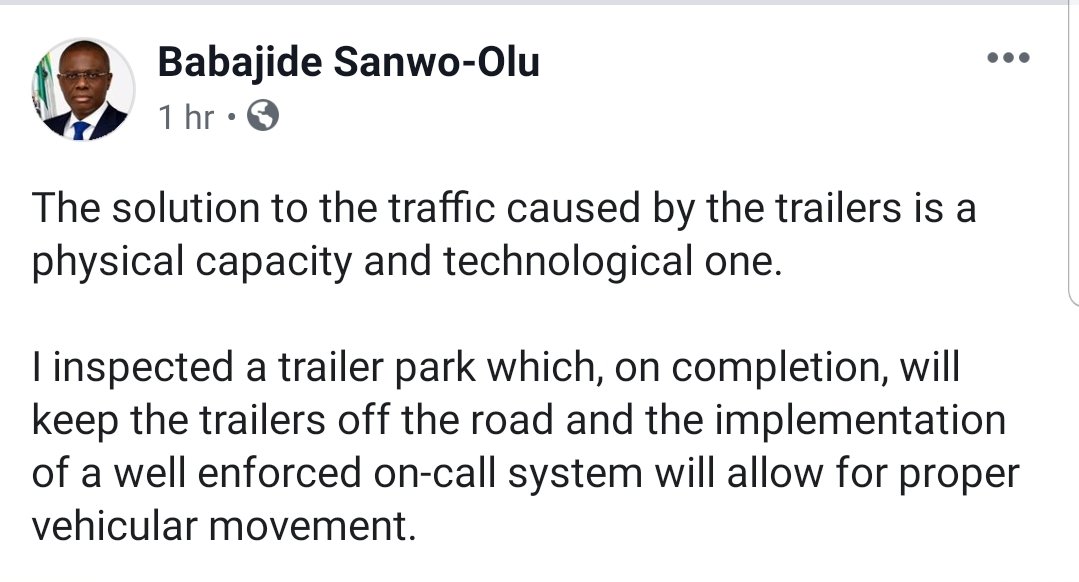 The solution to the traffic caused by the trailers is a physical capacity and technological one.

I inspected a trailer park which, on completion, will keep the trailers off the road and the implementation of a well enforced on-call system will allow for proper vehicular movement. 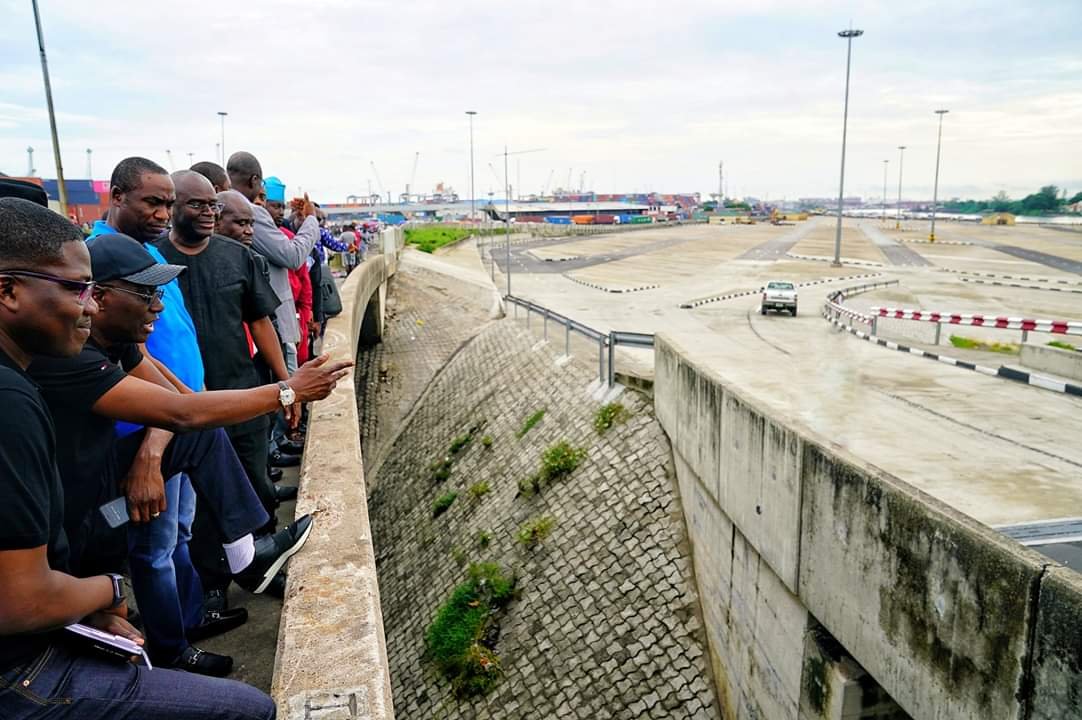 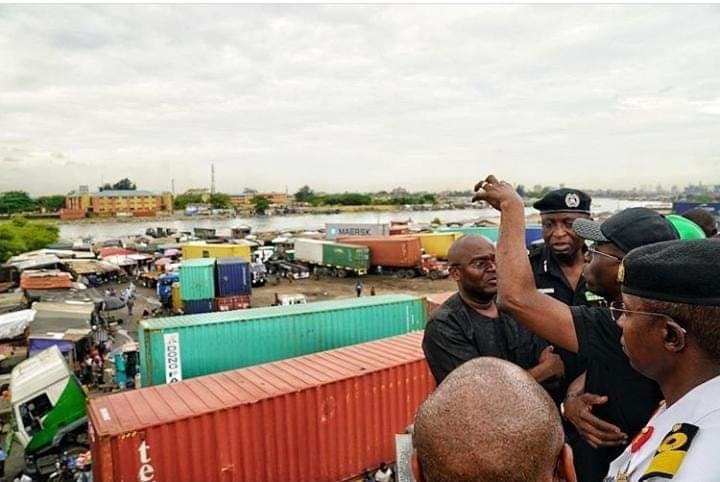 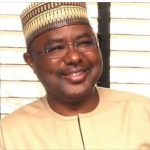 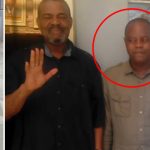