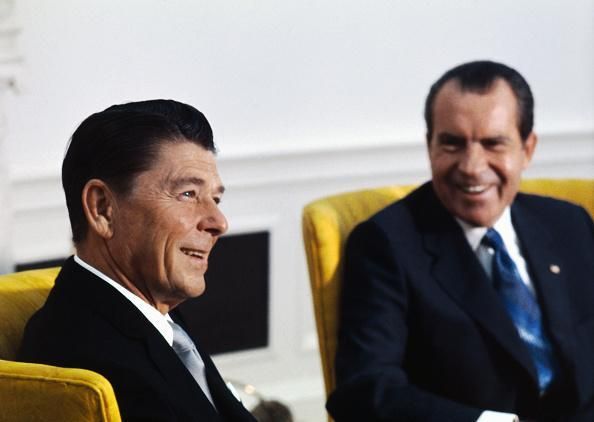 Ronald Reagan shared a racist exchange with Richard Nixon in a newly leaked phone conversation from 1971 in which the former president describes African delegates to the United Nations as “monkeys”.

Mr Reagan, who was governor of California at the time, was angered that African delegates at the UN sided against the US in a vote.

Members of the Tanzanian delegation started dancing after the UN voted to recognise China and expel Taiwan.

Mr Reagan, who was a supporter of Taiwan, called the president the following day to express his apparent frustration.

“To see those, those monkeys from those African countries — damn them, they’re still uncomfortable wearing shoes!”

Mr Nixon, who quit as president in 1974, can then be heard laughing.

The recording was unearthed by Tim Naftali, a clinical associate professor of history at New York University, who directed the Nixon Presidential Library from 2007 until 2011.

He published his findings in The Atlantic and wrote that the racist exchange was removed from the original tapes for privacy reasons.

The tapes were released by the National Archives in 2000 while Mr Reagan was still alive.

But he said the recordings were ordered to be reviewed following a court order. “Reagan’s death, in 2004, eliminated the privacy concerns,” Mr Naftali said.

“I requested that the conversations involving Ronald Reagan be re-reviewed and, two weeks ago, the National Archives released complete versions,” he added.

According to Mr Naftali, Mr Reagan called Mr Nixon to press him to withdraw from the UN. But the president later said Mr Reagan’s “complaints about Africans became the primary purpose of the call”.

Mr Naftali also said the president later told his secretary of state that Mr Reagan had described the Tanzanian delegation as “cannibals” that “weren’t even wearing shoes”.

Mr Reagan publicly defended the apartheid states of Rhodesia and South Africa in the 1970s, and Mr Naftail said the newly-revealed recording “sheds new light” on this stance.

He served as president from 1981 to 1989, at a time marked by the climax of the Cold War and the beginning of the end of Soviet communism. He died in 2004 aged 93 after a long battle with Alzheimer’s disease.

Insecurity: I Will Install CCTVs On Highways And Other Strategic Locations – Buhari