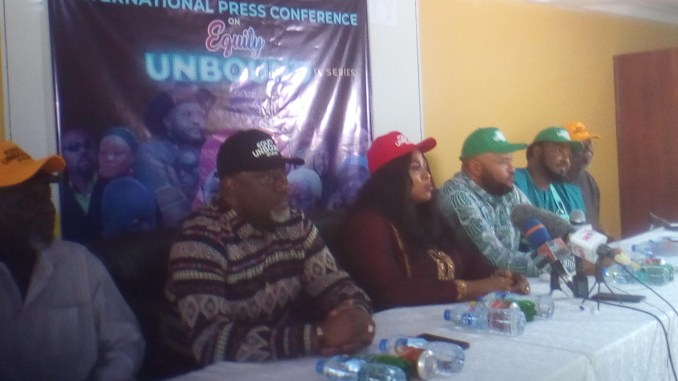 KanyiDally had reported that an Appeal Court in Abuja upheld the decision of the election petitions tribunal that nullified the election of Senator Dino Melaye.

Less than 10 hours after his sack, the Kogi born senator is set to be featured as one of the key actors, alongside the national chairman of the Zenith Labour Party (ZLT) Chief Dan Nwayanwu, in a television series titled ‘Equity unbound,” an idea of the Pillars of Hope African Initiative (POHAI).

Addressing a world press conference, the Country Director of POHAI, Chinyere Onyemekara, said the main focus of the project is on ‘equal rights and sociai justices in Africa,’ using Nigeria as a case study. She said:

“Equity unbound TV series is a soap opera that holistically ex-ray the quality of justice system in Nigeria and its attendant effect on both the masses, the elites and the government.

“It is a mind blowing expository drama presentation of the human rights challenges of an ordinary common Nigerian. A good example of the issues treated in this series is the recent report by BBC, on the pervasive threat of “sax for grades and sex for Marks” in Nigeria’s institutions of learning.

“The idea of this, is to use drama as an effective tool of communication to correct the ills and promote an acceptable social justice system in Nigeria.

“We at POHAI has taken it upon ourselves to expose this short comings for the purpose of strategic attention and correction.

“We hereby call on members of the fourth estate of the realm, civil society groups, the international community, cooperate organizations, Nigerian government at all levels and well meaning Nigerians to support in whatever way possible to bring this humanitarian project to fruition”.

Dino Melaye, speaking on why he joined the TV series, Melaye said it was to expose injustice in the society, said:

“There is no tension over the verdict of the Appeal Court. Life goes on.

“I’m happy to have participated in the series, especially as it will help correct social problems in the country.

“I am not a green horn in acting because I emerged the best actor during my NYSC programme.

“I am ready to serve this country in any capacity and I feel that participating in the series is another way of contributing my quota in correcting the society ills in Nigeria.

“If I have such opportunity again I won’t hesitate to take it”.

The drama’s director said that Melaye acted the role of Joshua in the series, which is an assemblage of professional actors and politicians.

“The drama is all about tackling social vices in the society. The drama, he said captures such issues like corruption, injustice, bad governance and so on,” he stated.

Meanwhile, Melaye made headlines a few weeks ago after he took to his social media page to outline some grammatical blunders made by Nigerians.

The popular senator who is known for many things in Nigeria, took to his Twitter page to show off his English speaking skills by teaching Nigerians the correct way to speak the foreign language.