Edo State Governor, Godwin Obaseki, has urged the former National Chairman of the All Progressives Congress (APC), Adams Oshiomhole, governorship candidate of the APC, Osagie Ize-Iyamu and other members of the APC to join hands with his administration in moving the state forward. 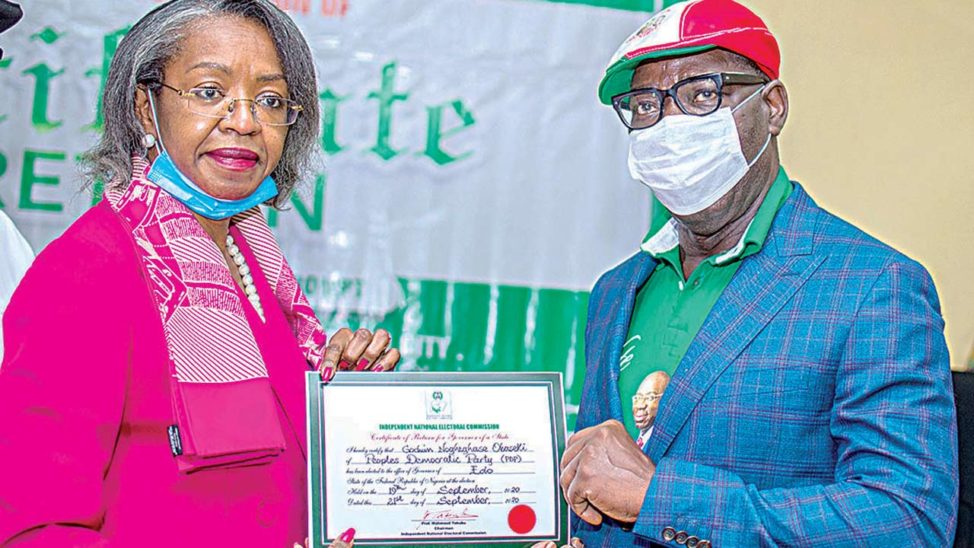 Obaseki made the call when the Independent National Electoral Commission (INEC) presented him certificate of return on Tuesday, September 22, 2020, following his declaration as winner of the September 19 governorship election in Edo state.

He commended President Muhammadu Buhari for rising above partisan politics by allowing the will of the people to prevail in the just concluded governorship election.

“I thank President Muhammadu Buhari for the part he played in ensuring a free, fair and credible election. He will be remembered as the father of democracy in Nigeria. He had a choice to ensure his party was declared winner but insisted that the right thing be done.”

The governor told Oshiomhole, Ize-Iyamu and members of the opposition party, the APC, that the fight was over and implored them to join his administration to move the state forward.

READ:  See How Much Each of the 36 States Got as Federal Allocation in September 2016

“I use this opportunity to reach out to our brothers on the other side of the divide as we are one family in the pursuit to provide public good for our citizens. The election shows that they trust us more now to provide leadership. It doesn’t mean the opposition parties don’t have a role to play.

“I use this opportunity to extend the hands of fellowship to my brother, Pastor Osagie Ize-Iyamu and his other colleagues in the APC as well as other parties to join hands with us to move Edo forward.

“I call on Adams Oshiomhole that the fight is over and he should come and join in building the house which he was part of in laying the foundation. We have no malice but only disagree on the approach in moving Edo forward.”

Obaseki commended the leadership of INEC for their unbiased role and the commission’s National Chairman’s ability to withstand pressure as an umpire.

He also praised the leadership of the Peoples Democratic Party (PDP) for its tenacity and doggedness in ensuring the party got victory and the paramount Benin monarch for his fatherly role.

This is coming just a few hours after Governor Obaseki warned Oshiomhole that if he continues to unleash his lions in the state, then there will be no mercy for him.