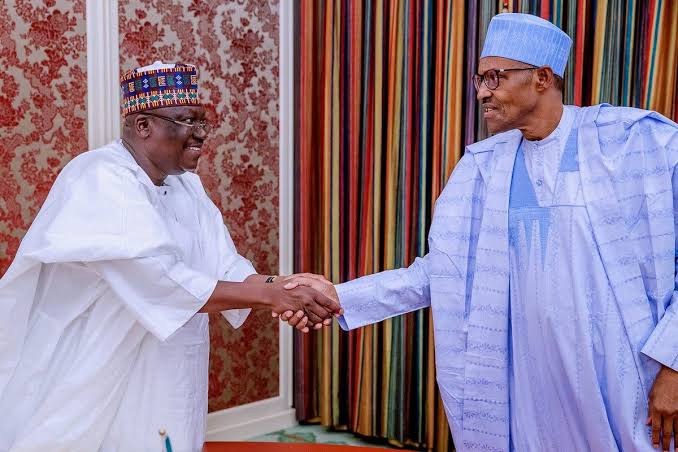 Lawan stated this on Thursday when he presented Senator Elisha Abbo to the APC national leadership at the party’s secretariat for formal introduction.

KanyiDaily recalls that Senator Abbo had on Tuesday defected to the APC, saaying his action was because of the mismanagement of the PDP in Adamawa state by Governor Umaru Fintiri.

Speaking during the presentation, Senator Lawan said that despite inheriting poor governance in 2015, President Buhari came in with determination and focus to ensure that this country works for citizens.

“Yesterday, our brother, our colleague, the youngest Senator in the current dispensation, having consulted very widely with his people at home decided to leave the PDP for the APC.

“President Muhammadu Buhari has had a date with history before… we came in in 2015, we inherited everything but poor governance but President Buhari-led came in with determination and focus to ensure that this country works for citizens. That government resources are prudently and economically utilised and applied for the people.

“Though we inherited empty treasury, the price of crude went down so badly, yet the little resources we started with provided lots of infrastructure and services to this country. So, to many right thinking politicians, when you see prudence, sincerity, purposefulness in leadership the best thing to do is not to be left behind but to join forces with the said leadership for the benefits of the people you represent or lead,” he quipped.

Meanwhile, the PDP said it will not allow Senator Abbo to run away with its mandate, adding that it would take immediate steps to ensure the senator does not remain in the upper legislative chamber.

Over 6,900 People Test Positive For HIV Within Six Months In Oyo State – OYSACA