The Federal Government has written a petition to the Cable News Network (CNN) demanding an “immediate and exhaustive investigation” into its report on the shooting of #EndSARS protesters at the Lekki toll gate, Lagos State. 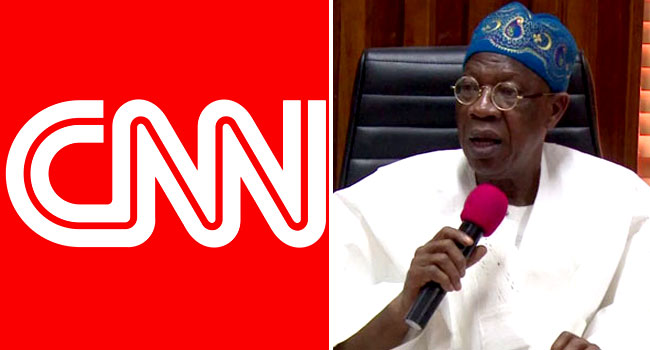 Reacting during a press conference, the minister of information, Lai Mohammed said that CNN should be sanctioned for misinformation and irresponsible reporting.

READ:  Man Rescued After Getting Trapped In Tunnel He Dug To Spy On His Ex-girlfriend [Photos]

However, the spokesperson of CNN said that the news network stands by its report that soldiers used live bullets on #EndSARS protesters in Lagos.

CNN said the report is based on multiple witness account, adding that the army and police declined calls to respond to the investigation before the story was published.

Lai Mohammed has written a petition addressed to Vice-President, Communications of CNN, Mr. Jonathan Hawkins, accusing CNN of 15 grave journalistic offences in its coverage of the reported shooting at Lekki Toll Gate in Lagos.

The Minister said CNN’s report titled “How a Bloody Night of Bullets Quashed a Young Protest Movement,” did not live up to the most basic of the core principles of journalism — balance and fairness.

He also said  that CNN failed to show a balanced reportage but rather relied “heavily on manipulated social media videos” adding that the inciting report is capable of setting the country on fire.

READ:  Businessman Arrested For Faking His Own Kidnap And Demanding N10 Million From His Family

…”Our attention has been drawn to an ‘investigation’ by CNN, entitled ‘How a Bloody Night of Bullets Quashed a Young Protest Movement’ and aired on 18 November 2020, in which the international news organization said it had “uncovered that Nigerian security forces opened fire on unarmed protesters” at the Lekki Toll Gate in Lagos, Nigeria, during the #EndSARS protest.

…We write to put on record that the report did not just fall short of journalistic standards, it reinforces the disinformation that is going around on the issue, it is blatantly irresponsible and it is a poor piece of journalistic work by a reputable international news organization.

“In objective journalism, stories must be balanced in the sense of attempting to present all sides of a story. Fairness means that a journalist should strive for accuracy and truth in reporting, and not slant a story so a reader draws the reporter’s desired conclusion.”

…”Rushing to air such a momentous story without presenting the government’s side is inexcusable and indefensible. CNN said it contacted over 100 protesters and family members, but did not speak to one official of Nigeria’s Federal Government.

“While CNN said there was no response from the army and that officials of Lagos State would not speak in view of the Judicial Panel that is investigating the matter, it did not say what effort it made to speak with any official of the Federal Government.

“It is, therefore, strange, to say the least, that she would rush to air such an important investigation report without getting the government’s side. In other words, Nima, and by extension, CNN, breached the most basic of the core principles of journalism — balance and fairness.

…”Another serious breach by CNN, in its ‘investigation’, is that the network relied heavily on unverified footages it harvested from social media. CNN was not present at the Lekki Toll Gate on the night of the incident.

“Neither its reporter nor cameraman was there, but it relied on eyewitnesses. Well, this is fraught with danger. While experts say eyewitness testimony is a potent form of evidence, it is also subject to unconscious memory distortions and biases.

“Unlike CNN, a reporter from the British Broadcasting Corporation (BBC) Pidgin Service, Damilola Banjo, was at the Lekki Toll Gate on the night in question, and was quoted as saying soldiers shot sporadically into the air and not at the protesters — a direct contradiction of the position taken by CNN who relied on second and third-hand information.

…”In airing its ‘investigative’ report, CNN conveniently forgot that on Oct. 23rd 2020, it emphatically tweeted, from its verified twitter handle, that the military killed 38 people when it opened fire on peaceful protesters on Tuesday, Oct. 20th 2020.

“Almost a month later, the same CNN — after a supposedly exhaustive investigation — is now reporting only one death from what the world was made to believe was a massacre. Is CNN not embarrassed by this sharp climbdown? Has CNN owned up to this and apologized for its faux pas?

…”It is also interesting that while CNN obtained footage showing when the vehicles carrying soldiers left their barracks and arrived at the Lekki Toll Gate, it could not obtain any footage showing the bodies of those supposedly killed in the massacre. After all, forensic ballistic experts will most likely testify that firing military grade weapons into a crowd will not leave anyone needing a microscope to look for blood or bodies at the scene.

READ:  “I Will Remain Your Headache In 2020 If You Don’t Repent" - Fayose Tells Haters

…”CNN has said it stands by its story, and that ‘our reporting was carefully and meticulously researched.”

This is baffling, considering that the story lacks fairness and balance, as we have pointed out, and that the organization relied heavily on manipulated social media videos.

“This resort to an escapist cliche seems more like a face-saving measure by an otherwise respectable news network caught in the blinding glare of ‘fake news and disinformation headlamps.

“Or how else does one explain the arrogant defence of an international news network that would not even respect the most basic principle of journalism?

…”One of CNN’s star eyewitnesses in its ‘investigative reporting is DJ Switch. Unknown to CNN, DJ Switch’s story on the Lekki Toll Gate shooting has changed several times.

“From claiming she counted 78 bodies of protesters who were supposedly killed by soldiers on the night of the Lekki Toll Gate incident, she has twice, at least, changed the casualty figure from 78 to 15 and then to 7, without a shred of evidence.

“CNN cannot pretend not to know that for anyone to act as a witness, his or her credibility must be unimpeachable. DJ Switch’s credibility does not meet that threshold.

…”In one of social media videos of DJ Switch that was used by CNN (see attached link 1), the lady (DJ Switch) claimed she and some unnamed persons carried dead bodies and dropped them at the feet of the soldiers.

No video or photos of dead bodies

“She also claimed she spoke to their commander before the soldiers threw the bodies into the vans. Curiously, for someone who was streaming live on Instagram during the Lekki Toll Gate incident, there was not a single video or picture of the dead bodies.

“Not even Godson (Uyi), another CNN star witness whose video was also used by the network, or any of the hundreds of protesters, all armed with smart phones, at the scene recorded a video or shot a picture of dead bodies being carried away by soldiers.

…”Talking of Godson, despite claiming to have analyzed hours of footage, it is curious that CNN conveniently left out key parts of Godson’s 57-minutes, 5-second video (see attached link 2).

“For example, 13 minutes, 40 seconds into the video, there were voices, in street lingo, in the background telling Godson that the gunshots were not from the soldiers (na boys dey shoot, that na local gun sound….it’s boys, meaning touts and hoodlums, who are shooting.

“That’s local gun). Some 20 minutes, 14 seconds into the video, Godson confirmed that the boys had brought out their guns and were shooting (local okah, he called it).

“Some 23 minutes, 14 seconds into the video, Godson said ‘wait, all these boys dey shoot’ (meaning gunshots rang out from the touts/hoodlums). CNN, in its rush to nail soldiers and tell a ‘radically different story’, conveniently left out these parts of the Godson video, which could have shown that armed hoodlums invaded the Lekki Toll Gate that night, and could have hit any of the protesters as they shot sporadically.

“This is clearly a ploy by the CNN reporter/presenter to manipulate viewers of its ‘investigative’ report and force them to draw the reporter’s desired conclusion! Another video showing an armed protester at the Lekki Toll Gate (see attached link 3) was apparently not among the footages reviewed by CNN!

…”It is shocking that all through its investigation’, CNN did not for once mention the fact that six soldiers and 37 policemen were killed during the #End SARS crisis, which also left 196 policemen injured, not to talk of the monumental destruction of government and private properties across the country.

“Instead, the network is fixated on the massacre that never happened. Are security agents not human beings too? Are they not entitled to the protection of their human rights?

…”For the record, this is not the first time that CNN has carried an inaccurate or hoax story about Nigeria.

“In February 2007, Nigeria accused CNN of staging one of its reports from the country’s Niger Delta region, showing gunmen holding 24 Filipinos hostage. Of course, CNN and its then Africa Correspondent Jeff Koinange flatly denied the charge, saying the network did not pay for any part of the report.

“Later, in an email reportedly sent to a friend, Mr. Koinange was quoted as saying: “Of course we had to pay certain people to get the story… You do not get such a story without bribing.” So much for denials!

…”As a form of remediation, Nigeria’s Federal Government demands an immediate and exhaustive investigation from CNN into its ‘investigative’ report on the Lekki Toll Gate incident to determine, among others, its authenticity, whether or not it met the basic standards of journalism and also the selective use of unverified social media videos to manipulate public opinion.

“While it is up to CNN to accede or not, please note that the Federal Government reserves the right to take any action within its laws to prevent CNN from aggravating the #EndSARS crisis with unprofessional, irresponsible, one-sided, inciting and sensational reporting that is capable of pitching Nigerians against themselves and setting the country on fire.”

READ:  "I Know My PDP Colleagues Are Missing Me" - Akpabio Says As He Apologize For Leaving Them