Ebonyi State Governor, David Umahi has officially decamped from the Peoples Democratic Party (PDP) to the All Progressives Congress (APC).

KanyiDaily recalls that Governor Umahi had told PDP national leaders that he wants to join the ruling APC unless if the opposition party would zone the 2023 presidency to the South-East.

In reaction, the PDP admitted that the concerns raised by Governor Umahi were genuine, but the party does not act on impulse of one or two individuals.

PDP’s National Publicity Secretary, Kola Ologbondiyan, also noted that the party has not started discussions on the zoning of candidates in the 2023 presidential election.

After a meeting with Mai Mala Buni, governor of Yobe and chairman of the APC caretaker committee, on Monday, Imo State Governor, Hope Uzodinma had said Umahi will confirm his defection to the APC “in a few hours”.

At a press conference in Abakaliki, capital of Ebonyi, on Tuesday, November 17, 2020, Governor Umahi confirmed that he has officially joined the ruling party (APC).

Umahi attributed his action to the “injustice” done to the South-East, wondering why the PDP has not zoned the presidency to the region.

He also said that he has no deal with the APC or any member of the party with regards to zoning of the presidential position to the southeast.

“Let me clear the air and state that I never sort for the ticket of PDP Presidency and I will not. Whoever that said that I moved to APC because they refused to zone the ticket to me is being very mischievous. Because even if PDP promises me, an individual a presidential ticket, how does it work?”

“It is expected that we’ll over 8000 delegates would elect the person and such promise can not happen without more than 10 or 20 people. People are being very mischievous but I tell you, there are a lot of prominent people from South East that can take the slot of PDP.

“I have to lead the protest against the marginalisation of the Igbos by the PDP and I don’t have to consult anybody to lead such a protest.

READ:  Boko Haram Kills Three Of Its Own Leaders For Allegedly 'Going Soft' On Nigerian Army

“I don’t want the PDP to collapse in the South-East but it can collapse itself in the zone if it does not heed the peoples’ advice to entrench justice, fairness, and equity.

“The PDP should be bold to declare its stand on zoning of the presidency to the South-East and if it cannot, should tell us why we are not capable of holding such a position but will come for our votes during elections,” he said.

Umahi said that the decision to leave PDP was not about leadership but about patriotism, justice, fairness and the overall interest of the people.

“I am not vying for any position in the APC so anybody who does not like me over the defection will be fighting the air.

READ:  "I'm Upset With The Level Of Poverty In Nigeria" – President Buhari

“I will instead play the fatherly role of guiding anyone who wants to vie for any position because it is a waste of time for any governor to seek to replace himself.

“When you are looking for everybody to be loyal to you in politics, you might not get to your destination because destinations are not straight but full of obstacles,” he said.

Umahi said that he will not be disturbed if the APC fails to zone the presidency to the South-East but will depend on God to determine the matter.

“We would be 24 years with the PDP by 2023 and Ebonyi, under my administration, will testify the numerous feats we have attained with the support of my friend and father, President Muhammadu Buhari,” he said.

He said his defection has created a political gathering and mass movement, unprecedented in Ebonyi history with both PDP and APC faithful coming together to pursue a common cause.

“I will have no regrets if our agitations are not met in APC as it will be on record that a governor was sacrificed for the betterment of his people on what is rightfully, their due.

“We will still protest if we are still unfairly treated in the APC because protest is the beauty of democracy and if it doesn’t work now, it can work in future,” he said.

Meanwhile, Ohanaeze Ndigbo Youth Council (OYC) Worldwide has urged South-East Governor to join the APC, insisting that Igbos will not support the PDP in the 2023 Presidential Elections. 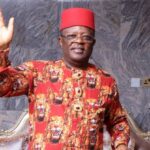