A grieving mother, Joy Iheanacho, has cried out to Nigerians after the police demanded the sum of N200,000 from her to track the impostor they allegedly released her missing child to in Lagos State. 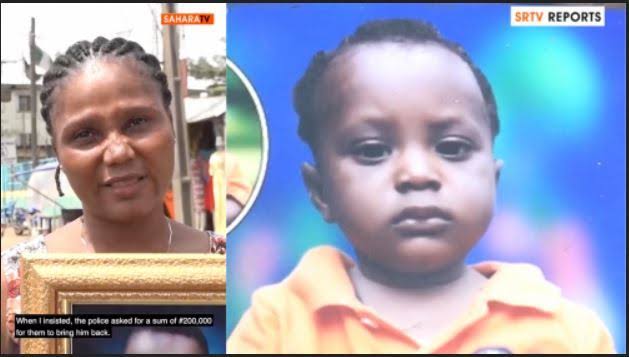 According to Punch, the woman accused policemen attached to the Juvenile Welfare Centre at the Alakara Police Division, Lagos, of demanding the money after requesting proof that she is the mother.

It was gathered from footage reposted on social media by @segalink that Joy’s son was returning from school when he suddenly went missing four years ago.

While efforts were on to locate the whereabouts of the child, Joy said she was able to track down the location of her son through a Facebook post.

The post read, “Found Child by name Chibuike Ogbonna, Male 9yrs old, fair in complexion, speaks English and Igbo lang, hails from Agba in Oboama, Ohaji LGA of Imo State, he is presently in Ojo Division, Lagos State Police Command, grateful assist and repost so that if any of his family members can be trace they can call this number. 08031939075. Thank you.”

The victim’s mother said when she got to the Juvenile Welfare Centre at the Alakara Police Division, the policemen asked her to provide documents to proof that the child was birthed by her, adding that after providing the documents, she was told that he had been released to another woman, who took him to Imo State.

She said in pidgin English, “My name is Joy Iheanacho, wetin carry me come here nah because say I dey find my pikin over four years ago. My pikin dey come back from school and I no see am. I see where dem post am for Facebook and I come go where dem say the pikin dey in Alakara Police Station.

“They asked me for birth certificate, immunisation and antenatal cards and I carry am give them to give me my pikin, but dem no carry am give me, dem say one woman come and dem carry the pikin give am go Imo State.”

The development, however, took another dimension when Joy said the police allegedly demanded N200,000 to track the location of the woman that her son was released to, adding that she decided to speak out for Nigerians to assist her in raising the money to locate her child.

“As dem carry am go Imo State, dem come dey say make I go bring N200,000 come for dem to go carry the pikin come; that’s why I dey cry today because I no get the N200,000 to give; make Nigerians help me; people wey go fit help me make dem help me; I no get the money; na my piki nah him I want.”

When contacted, the state Police Public Relations Officer, Muyiwa Adejobi, said, “We have three women claiming the baby as I speak with you. The baby was found by the Ojo Division, which transferred the case to the Alakara Juvenile Welfare Centre, which is an entity on its own and is not under the Alakara Division, but under the state police command.

“A woman came and the baby was joyous towards the woman and we handed the child to the woman and did the normal thing like taking pictures and documentation. This woman, who took the child from the station, is a suspect. Another woman in Imo State, who is currently in possession of the child, is also a suspect; we are working hand-in-hand with the Imo State Police Command to arrest the woman.

“This new woman, who claimed that her relation called her that they saw a picture of a child on Facebook and she should go and check it out, rushed down to the Alakara JWC; she has not set her eyes on the child, but she is claiming the child and came up with the allegation that the police requested N200,000 to retrieve her baby, this is not true; the matter is a complex one and the command will take its time to investigate it.”

READ:  Student Recounts Experience After He Escapes From Ritualist!

Meanwhile, a 37-year-old mother of two children, Andi Lugas, who passed away while having sex romp with her married lover in Yola, Adamawa state capital.