Nollywood actress, Etinosa Idemudia has taken to social media to express her anger towards a popular blogger, Stella Dimokorkus, who reported that her second marriage has crashed after six months. 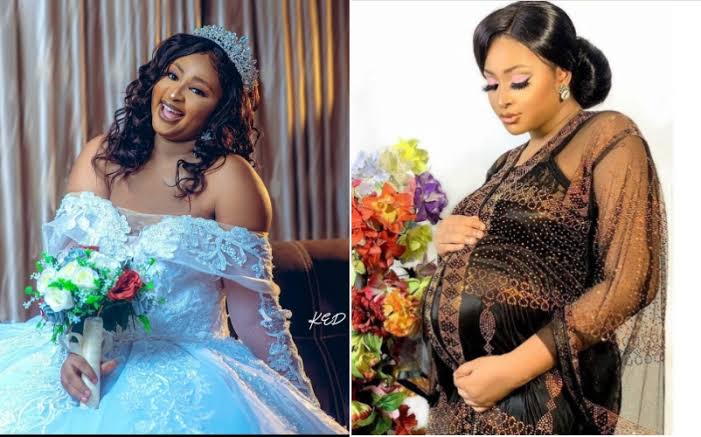 Etinosa secretly got married traditionally in September 2020 to a Benin-based lawyer simply known as Ighorosa and in December 2020 they welcomed their daughter.

Stella Dimokorkus, popularly known as SDK, had reported that Etinosa and Ighorosa ended their six months old marriage due to irreconcilable differences.

The report did not state the reason for the breakup, but it confirmed that the actress has left Benin and returned to Lagos with her five-month-old daughter.

Reacting to the report, Etinosa slammed Stella for always being the one to publicise private news about her including her broken marriage.

She, however, confirmed the report of her failed marriage and thanked Stella for helping her to get the burden of the matter off her chest.

“This ‘old witch’ again! I really do not want to reply you but I feel you will never stop if I ignore. You were the first person to publicise my pregnancy that was barely trying to survive past the first trimester due to its complication. I kept quiet,” she wrote.

“Now you have come again and I know you have receipts and you won’t dare us to deny. I don’t blame you, it’s the close friend, the insider who is feeding you. May God forgive that person.”

“Everyone is going through something including you. Thanks for getting this huge burden off my chest. You tried. But from now on, avoid me, Stella. T for Tenx.”

READ:  "My Son’s Crashed Marriage Has Nothing To Do With Me" – Former President, Obasanjo 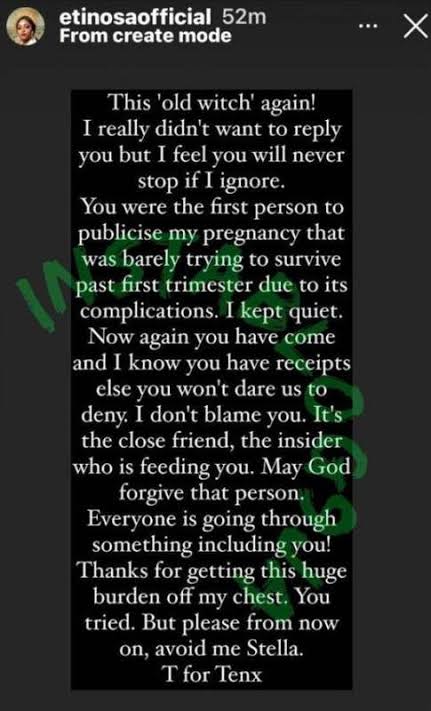 KanyiDaily had reported how Etinosa received severe backlash from social media users for smoking live on Instagram while using the Bible as an ashtray.

Alex Ekubo Is Ready To Tie The Knot With Fiancé!!!

Ivorian Lady Oye Kyme Whom Bobrisky Took In After She Tattooed His Name On Her Body Accuses Him Of Assault.