Ebonyi State Governor, David Umahi has ordered the arrest of a journalist, Godfrey Chikwere over Facebook posts he shared about Nigerian politicians and army.

It was gathered that Governor David Umahi ordered the police during the weekend to arrest Godfrey Chikwere, accusing him of “hate speech, incisive publication and cyberbullying.”

This was contained in a petition signed by Ebonyi State Commissioner for Information, Orji Uchenna Orji to the police commissioner.

The petition reads, “I write to inform your esteemed office as follows: That on the 8th day of October, 2021 at about 14:44 hours, one Godfrey Chikwere with phone number 080615707** did publish fake news and incisive post in Facebook profile called Godfrey Chikwere and other media platforms and stated as follows: Nigerian Army is seriously and willingly losing respect.

“That on the same 8th of October, 2021, Godfrey Chikwere in the Facebook profile made a dangerous and disturbing publication and stated as follows: ‘They (politicians) can pay a youth to murder a perceived political enemy but they can’t give such youth money to start a business.’

“That this false, fake and incisive publication is intended to cause fear, cyberbullying, riot crisis and breach of the peace in the state.”

Following his arrest over the weekend, aggrieved youths and activists in the state are organizing a protest to demand his freedom.

They also lambasted the Nigerian Union of Journalists for keeping mute while its member is being persecuted by the state government despite the guarantee for the freedom of speech in Nigeria’s constitution.

“Make una free this young man Godfrey Chikwere is high time government occupy (sic) themselves with relevant issues in the society instead of pursuing shadows. His arrest will end in futility#FREE CHIKWERE Now!!,” a Facebook user, Richard Nwafor posted.

An activist, Apst. Benjazy Nweke Oyenge said, “Don’t blame the governor of Ebonyi state for signing the law against fake news, blame your house of assembly members who allow (sic) the said law pass through all the necessary proceedings knowing fully well that it will be used against those who criticize or speak against any wrong governmental decision against the citizens.

“The present day House of Assembly in Ebonyi state are so interested in their personal gain from his Excellency forgetting their constituents who elected them to represent them. The ongoing arrest in Ebonyi state is nothing but a political fight against any perceived political opposition member in the state.

“Those that passed the bill into law should not forget that they will not remain in ruling party forever, tomorrow the same law may land on their skull for speaking against the government in power.

“Godfrey Chikwere is a law-abiding citizen and should not be held captive for expressing his fundamental human right which is freedom of speech except we don’t have such law again in Ebonyi state. It is only a military government that will not accept criticism, but in a democratic setting, criticism is one of the instruments of good governance.

“A reasonable government take correction from criticism and not otherwise. #FreeGodfreyChikwere.”

KanyiDaily recalls that Governor David Umahi had also threatened to sack any of his aides who insults President Muhammadu Buhari.

READ:  God Himself Instituted Polygamy, It's Not A Sin To Marry More Than One Wife - Nigerian Man 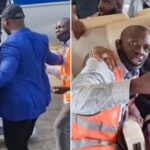 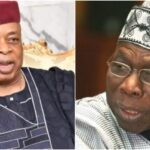