Charles Soludo, the candidate of the All Progressives Grand Alliance (APGA) in the 2021 Anambra governorship election, has has lamented over his inability to participate in the voting process. 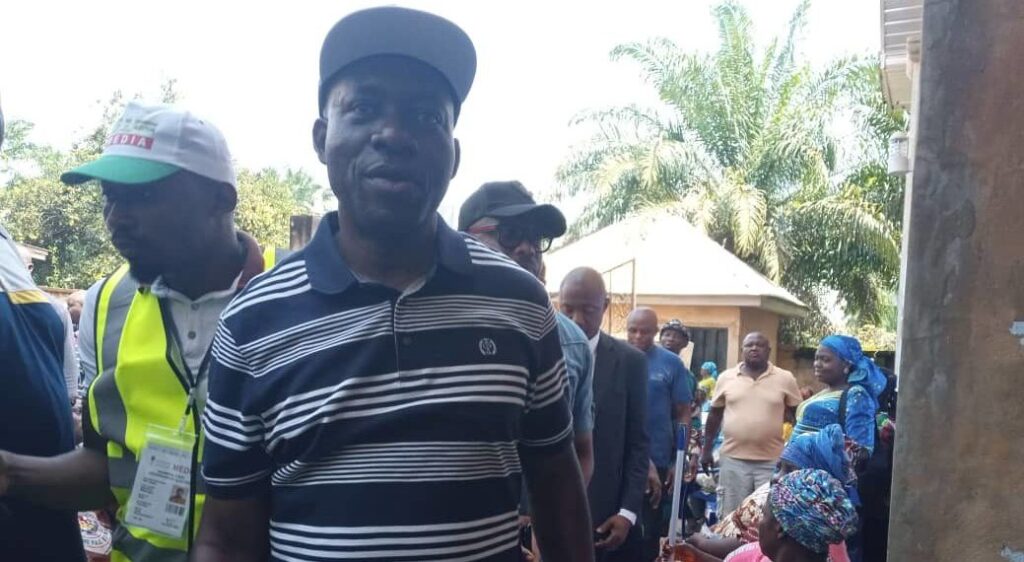 It was gathered that the Independent National Electoral Commission (INEC) has been experiencing technical challenges in the use of the the Bimodal Voter Accreditation System (BVAS) device to capture voters in some parts of the state.

Soludo, who arrived the Polling Unit 002, Ward 13, at Ofiyi Square, Isuofia in Aguata Local Government Area, at about 12:15p.m., could not be captured by the BVA system.

Speaking with journalists on Saturday, the APGA candidate described the BVAS device as a complete failure, noting that many people have not voted despite arriving at the polling unit early.

He said: “This BVA technology is a complete failure, and by almost 1.p.m. in the day, voting is yet to start in most of the polling units in the state.

“And in places where it is working, it takes about 20 to 30 minutes to capture a voter. With this crowd, even if the device starts working now, it is not possible to finish up within record time.

“It raises fundamental questions because I’m quite shock to hear that this technology breakdown is happening all over the state.

“I have been getting calls from virtually all LGAs in the state about the glitches. Places where you have 900 people, you have five or six that have voted so far.

“The fundamental problem is the technology that is being tried here in Anambra. It just hasn’t worked up to this minute. Maybe, we will still keep being optimistic.

“The technician who is supposed to be the expert has been fiddling with it (BVAS). I have been here for over 20 minutes, yet no way”

Soludo also decried the inadequacy of INEC staff and security personnel in some polling units during the Anambra election.

He said, “For example in Uke, there is a ward with 17 polling units but only five have INEC officials. The other 12, no officials.

“There is also the security issue, here in my polling unit, no single policeman.

”In Ihialla, I got a report that materials up until now have not left the local government. It is a very unfortunate situation. INEC should do the needful and make this process successful.”

Soludo, while urging INEC to fix the technology breakdown, said he was optimistic that the challenge would be addressed soon.

“The INEC chairman assured us that things will get better. So we are hoping the machines start working soon.

The APGA candidate commended voters for turning out in large numbers to cast their votes.

“Before 8.a.m., people have turned out in large numbers, even before the arrival of INEC officials, it is very commendable

“I urge our supporters to exercise patience and ensure they cast their votes whenever the machine starts working.”

Meanwhile, APC candidate, Andy Uba has expressed confidence that he will win the Anambra election as he cast his vote at his polling unit in Ugah, Aguata LGA.

READ:  President Buhari Vows To Hand Over 'Nigeria Free Of Insecurity' To His Successor