A mild drama ensued at the Senate Committee on Tuesday when two lawmakers walked out on the panel over alleged lopsided recruitment in the Nigerian Army. 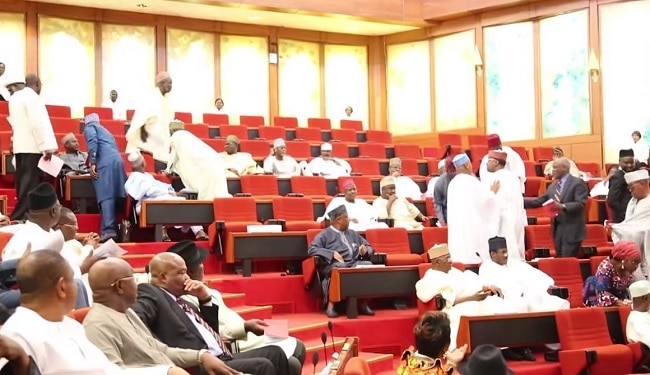 The incident happened during the committee’s interactive session with the Commander of Training and Doctrine Command of the Nigerian Army, Maj.-Gen. Steven Olabanji.

Members of the committee, Senator brahim Danbaba (PDP, Sokoto) and Senator Barinada Mpigi (PDP, Rivers) staged walkout when they were prevented from grilling the senior Army officer over allegation of lopsided recruitment carried out recently by the Nigerian Army.

Danbaba, who is also the Senate Deputy Minority Whip, had asked General Olabanji to explain alleged lopsided recruitment carried out by the Army recently.

The acting chairman of the committee, Senator Abba Moro (PDP Benue), who presided over the meeting, ruled Danbaba out of order, saying “this meeting is not for such enquiry”.

Another committee member, Senator Barinada Mpigi (PDP, Rivers) raised the issue again, saying “lopsidedeness in recruitment is not an issue to be put aside or ruled against”.

But Senator Moro again ruled against the enquiry, insisting that the session was not for review of recruitment made by the Army but on tactical training and doctrine of men and officers.

He said, “The questions being raised by my colleagues on alleged lopsided recruitments are being thrown to the wrong person. The Chief of Army Staff, Lt. Gen. Farouk Yahaya is the one who can do justice to such allegation or enquiry.”

Apparently angered by the insistence of Abba Moro that questions on recruitment should not be entertained at the session, Danbaba and Mpigi walked out of the meeting in anger.

Speaking to newsmen after, Senator Danbaba said he walked out of the meeting with Senator Mpigi because of dictatorial action of Senator Moro.

Danbaba said, “He shouldn’t have ruled us out of order since the military man the question was directed to did not complain.

“The issue of marginalization in recruitment has never been responded to, it is part of the oversight process of the committee to ensure that whatever is to be done should be done to ensure Justice.

“The Nigerian army like any institution of government in Nigeria is supposed to comply with provisions of the constitution of the federal Republic of Nigeria 1999 as amended and that constitution has made it very clear that the issue of federal character and representation is paramount is a constitutional issue.

“I’m not blaming the army, the army has been performing very well, but at the same time the issue of recruitment is very important. I left the meeting, I stormed out with Mpigi because we were angry.”

Moro later told reporters that he had no regret for ruling Danbaba and Mpigi out of order as far as the issue of alleged lopsided recruitment was concerned.

He said, “Danbaba and Mpigi’s questions were directed to a wrong person. What explanation were they expecting from Commander, Training and Doctrine Command on recruitment.

“Besides, the committee had tabled the issue before the Chief of Army Staff few months ago with response bordering on physical and medical reasons for those recruited and those who failed in the exercise.”

Meanwhile, a Senate Committee has rejected a $700 million loan request by President Buhari for Sustainable Urban and Rural Water Supply, Sanitation and Hygiene (SURWASH) under the Federal Ministry of Water Resources.