A Nigerian soldier was caught on camera crying and begging a superior officer who caught him extorting money from motorists along the popular Maiduguri-Damaturu Highway. In a viral video, the soldier was seen crying, prostrating, and pleading with the senior officer who asked him to surrender all the money extorted from motorists.

After handing over the money he extorted, the embattled officer lamented to his boss that he wasn’t ready to lose his job after serving for over 30 years in the force.

“I don suffer for army, Oga abeg..Oga don kill me, I don old for army, na 31 years I de army, Oga make I lie down for you abeg,” the embattled sergeant lamented.

While the soldier was heard saying he has worked for many years for the Nigerian Army amid tears, the unknown superior officer responded by telling the erring personnel that he was behaving like a low-level soldier.

Commenting on the video, a soldier said, “He is not a young soldier at all, he is a staff sergeant, it’s so sad. He really embarrassed the military.”

READ:  Lamido Sanusi Reveals Why Buhari Should Be Impeached By National Assembly

KanyiDaily had also published another video showing the moment some soldiers were seen ganging up to beat a mobile police officer over food in a muddy road in Warri, Delta State. 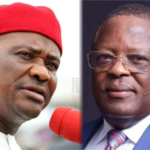