A teenage gunman identified as Salvador Ramos has killed 19 children and two teachers during a bloody rampage at Robb Elementary School in Texas, United States. 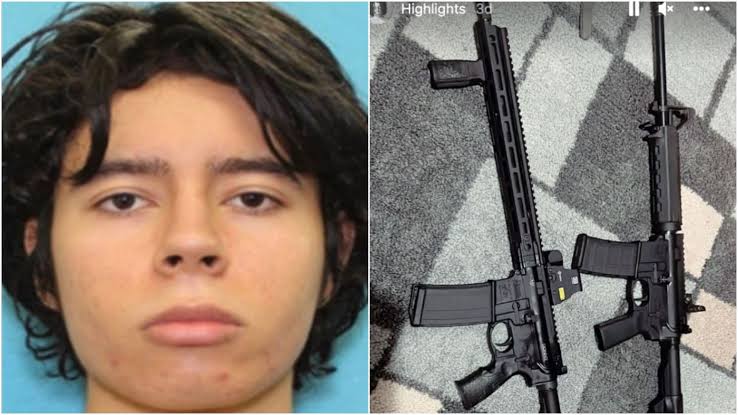 It was gathered that the 18-year-old Gunman first shot his own grandmother at a house before driving into the school carrying a handgun, a rifle, and wearing body armor around 11.30am on Tuesday.

Ramos was said to have opened fire on classrooms full of students in an attack that also killed 19 innocent children aged seven to 11 and two hero teachers who sacrificed themselves to save their pupils.

Ramos – who was clad in body armour – is thought to have exchanged gunfire with border patrol agents before barricading himself inside the school building.

The teen gunman – who shared chilling images of his arsenal on social media before the attack – was shot dead by cops at the scene, bringing the current death toll to 23.

Two heroic teachers, Imra Garcia, 46, and co teacher, Eva Mireles, 44, laid down their lives protecting the schoolchildren. They were both married with children of their own.

More than a dozen children were also hurt in the attack, including a ten-year-old girl taken to hospital in the nearby city of San Antonio in critical condition.

A second hospital within Uvalde itself said 13 children had been brought to them, without saying what condition they are in. Police warned late Tuesday that the death toll is expected to rise.

READ:  16-Year-Old Girl, Comfort Benjamin Raped And Strangled To Death On Her Birthday In Jos

Speaking at the White House where he had ordered flags to fly at half-staff in honour of the victims, President Joe Biden kicked off the inevitable debate about gun control.

Declaring himself ‘sick and tired’ of the cyclical discussion, he called for voters to ‘turn this pain into action’ to prevent more mass killings. ‘We have to act,’ he said.

Addressing the nation on Tuesday, Vice President Kamala Harris said “our hearts keep getting broken”, adding that “enough is enough”.

Ten-year-old Xavier Lopez was one of the 19 students who died in Tuesday’s school shooting in #Uvalde, Texas. His cousin said his mom was at his awards ceremony hours before the shooting, not knowing it would be the last time she would see him alive. https://t.co/lgbe4mvp8D pic.twitter.com/iDZoLaPsif

Authorities in #Uvalde, Texas say Salvador Raimondo Ramos, 18, is the gunman who killed his grandmother before murdering 14 young children at a school & a teacher. Two officers were also shot but survived. He was reportedly killed by responding police. https://t.co/5RAfTmRBJq pic.twitter.com/ji6wQfR1Qr

“My little love is now flying high with the angels above,” said the father of 10-year-old Amerie Jo Garza.

His daughter was one of the 19 children killed in Tuesday’s school shooting in Uvalde, Texas. He said she had just turned 10 exactly two weeks ago. https://t.co/lgbe4mvp8D pic.twitter.com/3xp4N5fy7u

NEW: The father of 10-year-old Annabelle Guadalupe Rodriguez tells us his daughter is missing following the mass shooting at Robb Elementary School in Uvalde, TX, where she is a student. He provided her photo to Texas Rangers. Many parents going through this tonight. @FoxNews pic.twitter.com/cVBF0aE4EM

“Our country is paralyzed, not by fear, but by a gun lobby and a political party that have shown no willingness to act in any way that might help prevent these tragedies," former Pres. Obama says after elementary school shooting in Uvalde, Texas. https://t.co/iojBtwE3lp pic.twitter.com/qC2TfB16Oy

This is considered to be the deadliest school shooting since Sandy Hook in Newtown, Texas, when 20 children aged seven to 10, and six staff members were slaughtered almost a decade ago.

FAAN Debunks Reports Of Lagos Plane Crash, Says ‘Aircraft Was Sold By Owner To A Buyer’