At least 22 young students were found dead at a popular nightclub under mysterious circumstances in a township in East London, South Africa. 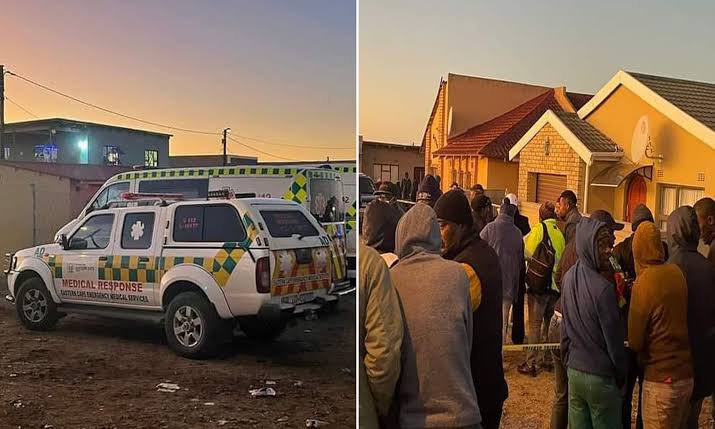 It was gathered that the police and paramedics were called to respond to the emergency which occurred at Enyobeni Tavern in the city on Sunday morning.

The South African Police Service (SAPS) confirmed that about 22 young people were found dead in a local tavern in Scenery Park after celebrating the end of winter school exams.

Brigadier Tembinkosi Kinana said the circumstances under which they died are under investigation, adding it was too early to determine the cause of death of the young adults aged between 18 and 20 years.

The bodies will be transported to state mortuaries where relatives are expected to help identify the victims, said Siyanda Manana, a spokesperson for the Eastern Cape provincial health department.

“We are going to immediately be embarking on autopsies so we can know the probable cause of death,” he said. “We are talking 22 bodies right now.”

Local television showed police officers trying to calm a crowd of people gathered outside the club in the city, which lies on the Indian Ocean coast, nearly 1,000km (620 miles) south of the commercial capital, Johannesburg.

Unathi Binqose, an Eastern Cape community and safety department official, speaking from the scene, ruled out a stampede as the cause of death.

“It’s difficult to believe it’s a stampede as there are no visible open wounds to those dead,” Binqose said.

“Parents whose children did not sleep home are gathered here and they want to enter the tavern to look for their loved ones.”

He said he understood the patrons were students “celebrating pens down, a party held after writing [high school] exams”.

A regional local newspaper, DispatchLive, reported that “bodies are lying strewn across tables, chairs and on the floor; with no obvious signs of injury”.

South African president, Cyril Ramaphosa in a statement said he was worried about the circumstances under which young people, potentially under the age of 18 years, were allowed to gather at the tavern.

Ramaphosa expressed his condolences to the families affected, noting that the law must take its course once investigations conclude.

Bheki Cele, the national policing minister, told a large crowd at Scenery Park: “The call is on the parents to see that their kids are kept well, the call is on the community to say we can’t allow our kids to die.”

A 17-year-old girl, who only gave her name as “Lolly” and lived close to the tavern, said the venue was a popular hangout with teenagers, but the community wanted it shut down after the tragedy.

“Everyone wants it closed down because they sell alcohol to underage children. Everyone is angry, everyone is sad because of what happened,” she said.

KanyiDaily had also reported how a 40-year-old Nigerian woman, Omotese Ebor was arrested in South Africa over an online romance scam in which an unnamed woman was defrauded of almost R2 million (N53m).

READ:  Anyone Who Dares Come Out On Monday In South-East Will Regret Their Life - IPOB