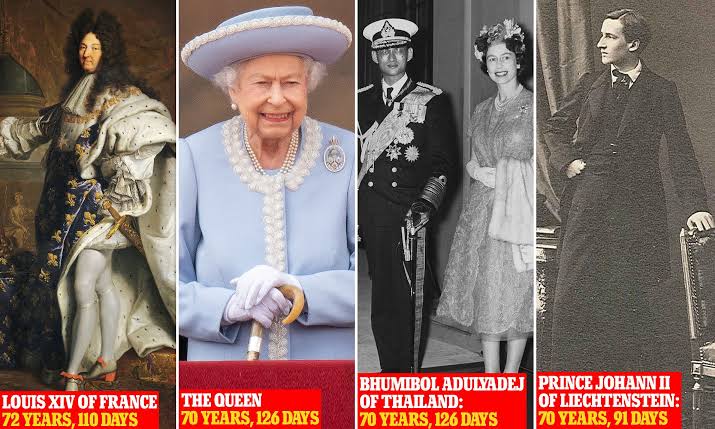 The longest-reigning monarch was Louis XIV of France, who remained on the throne for 72 years and 110 days between 1643 and 1715.

The milestone follows the Queen’s platinum jubilee celebrations, which took place over a four-day bank holiday weekend at the start of June.

The celebrations included the Trooping the Colour parade, a service of thanksgiving, and a jubilee pageant.

The 96-year-old monarch made a suprise appearance at last Sunday’s platinum jubilee pageant, where she said that there was “no guidebook to follow” for how to celebrate her seven-decade reign, and that she was “humbled and deeply touched” by the jubilee.

READ:  "Amaechi Confirmed That Voting Buhari Will Be A Mistake" - Atiku Reacts To Amaechi's Leaked Tape

Buckingham Palace released a statement on the Queen’s behalf to thank the nation for celebrating her for being on the throne for 70 years and 127 days.

“When it comes to how to mark 70 years as your Queen, there is no guidebook to follow,” it began. “It really is a first. But I have been humbled and deeply touched that so many people have taken to the streets to celebrate my platinum jubilee.

“While I may not have attended every event in person, my heart has been with you all; and I remain committed to serving you to the best of my ability, supported by my family.

“I have been inspired by the kindness, joy and kinship that has been so evident in recent days, and I hope this renewed sense of togetherness will be felt for many years to come.

“I thank you most sincerely for your good wishes and for the part you have all played in these happy celebrations,” Queen Elizabeth said.

KanyiDaily recalls that Barbados has recently removed Queen Elizabeth II as its head of state and distanced itself from its nearly 400 years of colonial rule.