Nollywood actresses, Blessing Nkechi Sunday and Tonto Dikeh, have slammed a former presidential aide, Reno Omokri, for likening them to a presidential hopeful of the All Progressives Congress (APC), Bola Tinubu. 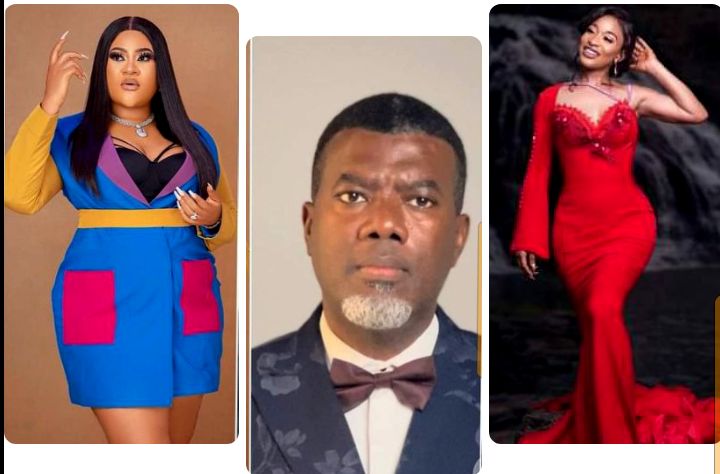 Omokri had taken to his Twitter page to shade Tinubu who had consistently argued that he deserves to be Nigeria’s next president because of his political records and the role he played in bringing President Muhammadu Buhari into power in 2015.

The former presidential aide also compared the relationship of Tinubu and Buhari, to that of Blessing and Dikeh, who he cited as examples of disgruntled lovers.

He wrote, “Tinubu is just behaving like Tonto Dikeh and Nkechi Blessing. Like a woman who was promised marriage and jilted and is now exploding and exposing the jilter. Buhari don buy market. He either builds another ‘other room’ for Tinubu, or marry him as promised!”

“And the curious thing is that Buhari has not yet cheated Bola Tinubu, and Tinubu attacked him. Why did he not wait until after the primaries before attacking Buhari? Now, he has given Buhari an excuse not to support him. I thought Bola Tinubu knew how to play politics. I was wrong. Very wrong!

Tinubu is just behaving like Tonto Dikeh and Nkechi Blessing. Like a woman who was promised marriage and jilted, and is now exploding and exposing the jilter. Buhari don buy market. He must either builds another ‘other room’ for Tinubu, or marry him as promised! #TableShaker

Reacting In a now-deleted post, the actress lashed out at the former aide to Goodluck Jonathan, wondering why he would use her failed marriage in such a manner.

Nkechi wrote, “I use to think you have sense, but it’s obvious you lack common sense..why put me in this context in the first place? Welcome to Nigeria when a relationship ends, automatically it’s the man that left the woman.

“I for like talk more but Instagram guidelines won’t allow. Mr Reno leave my name out of your mouth..no let God punish you #respectfully.”

She added, ”@renoomokri me go drag you with your white beard…better don’t even come for me, cus I don’t know wtf you are.

“Like a woman who was promised marriage and jilted…can you imagine…all your daughters will used and dumped @renoomokri so next time you see me waka pass.”

“I am sure the woman you married is also tired of that marriage, but what will people say won’t let her leave. I left what I’m not comfortable with and you joke with it. Only if you no get female children, they will go through worse.”

Taking to her Instagram page, the mother-of-one endorsed Peter Obi, while describing Omokri as “Atiku’s houseboy”, saying he is “always on the wrong side of history.”

“Rather you’re here fighting young girls with bigger dreams than being a bingo to an oga!! I’ll come back to give you a reply when Peter Obi wins. As for now, I’ll let you run your errands.”

KanyiDaily recalls that Bola Tinubu had claimed that President Muhammadu Buhari would not have won the presidential election in 2015 without his support.