A Nigerian man has been arrested by the police in Ghana for allegedly beheading his girlfriend over alleged money ritual. 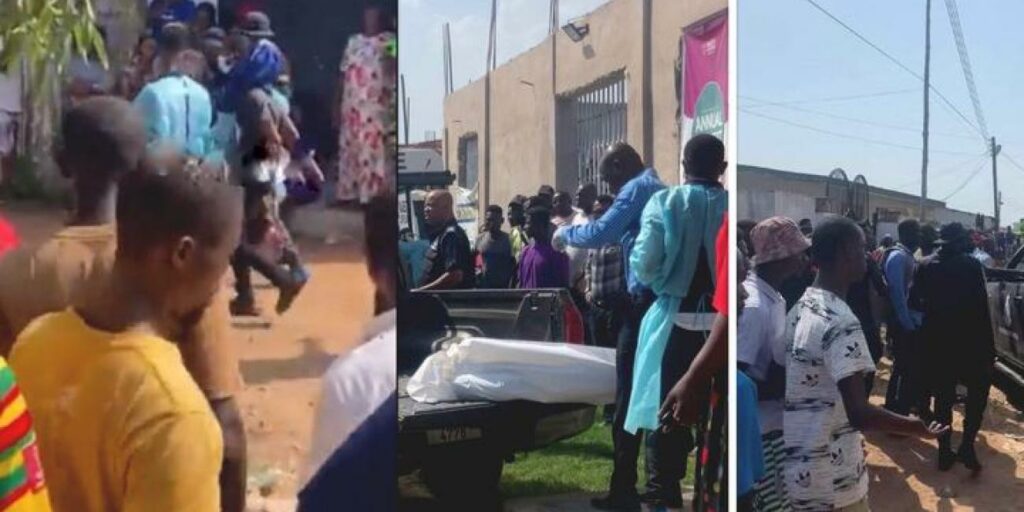 Nigerian Man Arrested For Killing His Girlfriend In Ghana

Media personality, Babs Cann who shared the news on Facebook, said the incident occurred at Spintex in Accra.

Sharing a video of the incident, she wrote; “A young Nigerian man has been picked up by the Ghana Police Service for allegedly beheading his girlfriend at Spintex.”

The video shows the moment the Nigerian man was arrested by the police while the corpse of his girlfriend was taken to the back of a pickup vehicle.

Another Facebook user, Smile Baba, who was at the crime scene, suggested that the man beheaded his girlfriend for money rituals.

Baba wrote, “Very sad development this afternoon. I have just arrived from a crime scene here in Accra, Ghana, where a Nigerian young man beheaded his Nigerian girlfriend in Spintex, Accra, Ghana.

“My question is, who actually lies to these young boys and girls that money rituals truly exist? Ladies, you have to be careful of who you trust; it doesn’t matter how calm the man looks. Just be careful.”

When contacted, the Public Relations Officer, Nigerians in Diaspora Commission, Abdur-Rahmam Balogun said the agency was not aware of the incident.

READ:  Nigerian Woman Beats Up Her Step-Son, Locks Him Up In Dog Cage For 3 Days [Video]

He, however, stated that the suspect would have to face the laws in Ghana.

He said, “Our stand is that any Nigerian that commits a crime, let the law of the land take its course.

“The Nigerian government has no role to play in such instance. If you go to another man’s land and commit a crime, the law of the land will always take its course.

“So, we always advise Nigerians to be good ambassadors wherever they find themselves. I’ve not watched the video and we have not been petitioned.”

Swipe to watch the videos:

KanyiDaily had also reported how a man was arrested for allegedly beating his wife to a pulp following a disagreement with his girlfriend in Rivers State.